It is called Super Fudge and the recipe was right where I put it - in the stack of miscellaneous recipes that sit in the corner of my cookbook cupboard.

This is a recipe my mother used to make for us when I was young. She probably found it in a Prevention Magazine or Mother Earth News or one such publication she was reading at the time. We all loved it. I have a copy of the recipe on an 8.5 x 11 piece of regular white paper, typed by Mom, smudged by me.

The recipe calls for honey. I know, I know. Honey is not in a vegan diet. You can substitute agave nectar. Agave nectar is a little thinner than honey, you may need to add a little extra carob powder or nuts to get the texture right. I was gifted two bottles of Wisconsin honey and I couldn't resist using it today. Thank you bees. I honor your efforts. I marvel at your expertise. 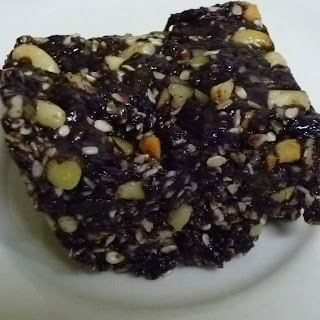 This fudge is very rich. I have seen a fudge that looks very similar sold in small cubes, about 1x1x1 inch. If you have more will power than I have, this recipe will last a long time.