I've fallen in love with something new. It's a spice called Tikka Masala and I buy it online at My Spice Sage. I've always had Garam Masala in my cupboard, but this one was new to me and the first time I used it, my taste buds stood up and danced. Honest.

In the beginning, I purchased the smallest amount for a small amount of money, just to see what it tasted like. Since then, I put it in just about everything that comes out of my kitchen. There is no vegan dish that's safe anymore. The depth of flavor Tikka Masala gives is perfect for my palette since it is the spices and herbs that makes eating vegan a delight rather than disgusting.

I put a pinch of Tikka Masala in my soups.

And on my veggie burgers.

And in my vegetable stews.

And in my rice.


And in my stir frys. 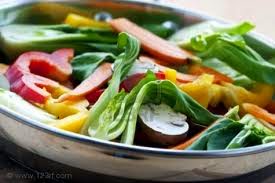 And in my oatmeal. Oops, got carried away. I don't do that one.

I discovered a Tikka Masala recipe in Everyday Happy Herbivore by Lindsay Nixon and I have to say that not only did I love it, but so did my company. We all went back for seconds. If you like the flavors of India, you'll adore this dish. Be warned: it is spicy. But not the kind of heat that hurts the mouth or the lips as does Mexican food. I served some vegan yogurt alongside for no other reason than to cool my mouth down every now and then. 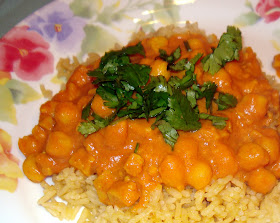 Put into a saucepan:

At the end, add 1 16 oz. can of chickpeas, drained and rinsed. Cover the pan and heat until hot. Stir in the blended tofu. Add salt and pepper to taste. Serve over rice. Garnish with cilantro and a dollop of vegan yogurt.

OR: In place of all the above spices, except for the garlic and onion powders, use 1 Tbsp. of Tikka Masala spice mixture. Saves a lot of measuring and not so many bottles sitting on the counter.

The only other exception I made to this recipe was to add 1/2 cup of diced tempeh, which I added with the chickpeas. The tempeh gave the dish a meaty mouth feel and added an extra layer of flavor that I found pleasing.