The world probably does not need another blog about quinoa. As far as I can tell, there are plenty. Here goes anyway...

I recall my mother(a very fine cook) experimenting with quinoa(pronounced keen-wa) a few years back but wasn't around to taste the results. I never gave it much thought afterward. It is billed as a super food. Technically the seed of a fruit, the grain is native to the Andes and is one of the few grains that are high in protein. It was much prized by the Inca(vegetarians) as a plentiful energy source. A cup of cooked quinoa has the same calcium content as a quart of milk and is high in amino acids. The Spanish conquerors did everything in their power to wipe it out in favor of more Europeanized foods.

We were in Ecuador a couple of years ago for the flower show and I don't recall seeing it on any menus. Ecuador is another of those places that people tell you not to go to that is a must see. Most of the crowd we went with stayed in the big "safe" Americanized high rise hotels(you know who you are you wimps) but David and I stayed in a hostal in the old town. We also stayed on a palm plantation/dairy farm in the rain forest for four days. Although our hosts offered us guinea pig(no thanks), I cannot recall that they served us quinoa. Alvaro and Norma were refugees from the city and were both gracious hosts. She is a fabulous cook. 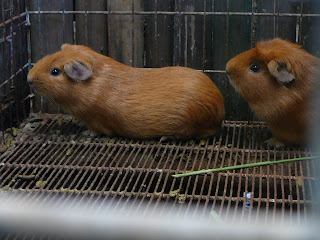 Last year we had two ladies from Quito stay with us for two months by way of hospitalityclub.org. They sang the praises of quinoa and although we never made it, Domenica made some killer pizzas! To the uninitiated, the trouble is you never know if homesickness and nostalgia color memories. I look back fondly at macaroni salad with mayonnaise and canned tuna fish. It is really not all that good but I can still eat it by the pound. Fond memories and all that.

Quinoa has a naturally occurring insect repellent coating called saponin which is washed off but it does require a further rinsing before cooking. It is used interchangeably for rice and bulgur and can be used in salads, soups, pilafs as well as to stuff vegetables. A lot of the recipes I came across incorporate dairy which is a no no for the Tuesday vegan. So I made my first quinoa dish on Sunday, a cream of mushroom soup that incorporated quinoa, heavy cream, button and shitake mushrooms, butter and rum. As Tuesday was fast approaching, I served it with blue d'avergnon on heavy three grain bread with a bottle of Australian Shiraz. Cheap and cheerful! The soup had a nutty taste to it that is a pleasant contrast to the meaty taste of the mushrooms.

My Tuesday vegan experiment is Curried Quinoa Salad with Dried Cranberries and Walnuts, recipe follows. It is a snap to make and I think would make a fine addition to upcoming holiday meals.

Rinse quinoa in a fine strainer. Bring water to a boil in a medium saucepan over high heat. Stir in quinoa. Reduce heat and simmer, uncovered for 25 minutes or until water is absorbed. Remove from heat and let cool.

Go to Ecuador. You will love it! 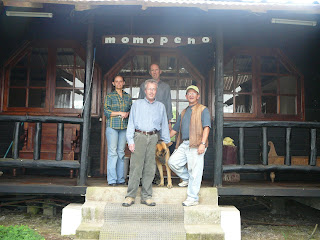 Posted by johnfordfw at 4:28 PM