Wanna see pictures of my grandchildren?

Of course not. Besides which, I have no grandchildren. But I do have cats. Seven to be exact. Or more appropriately, they have me. Anyone who has ever met a cat knows that they are not owned. They do the owning. So I am going to show you a few pictures of them. You probably don't care but it's my day to blog and I can blog about anything I want to. One of the rules for our Once A Week blog is that it should contain a recipe. There will be no recipes for cat. They wouldn't stand for it and I couldn't do it. 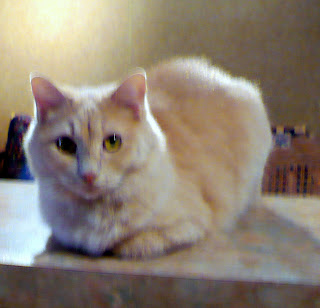 So, why would a once a week vegan blogger blog about cats? Because it's about choices. Choices we all make. Specifically, choices I have made. As you may know, I am not a vegan. I am a lacto ovo vegetarian. I eat eggs and dairy but not flesh and try to avoid anything that contains flesh or has resulted from animal suffering. It's a very difficult thing to keep up with. My 15 year old leather belt came from an animal and my shoes contain leather too. Some of the cheeses I eat have animal rennet. We have ants in the Chateau and I have to decide wheather to get out the Raid or not. I don't think anyone could possibly keep track of all the products that have been tested on animals or contain animal byproducts. These are things I consider. But I do not ask others to consider them. I'm not preachy. It's my path. You have yours. I don't think you are a schmuck if you enjoy a burger although I am not sure that eating a baby lamb is such a good thing. But those are your choices not mine.What has this to do with cats? Nothing. But in my case, everything.


Three years ago on April 17th, a stray came into our house and tucked five kittens in my bookcase. I had been trying to catch her for three years to get her spayed with no luck. She would have kittens on the side of the house and it would always end in tragedy. There is a very good chance if you come into my yard you are not leaving until you are fixed. Cats not people. Although there have been a few I considered..... I am on a campaign. That year she opted for finer accommodations and the kittens thrived. Then in August, she came in and had five more right behind my cookbooks. Which meant that we had 12 cats living in the house. We managed to get four adopted and I finally got her spayed. I have the scars to prove it. One of the first litter I named Carlisle. Kitty Carlisle died that week and I saw it as a fitting tribute. A mass of shiny black hair and quite a looker! All seven have moved to Northwest Arkansas with me and are loving being able to go out onto the screened porch. There are deer and birds and other things that cat dreams are made of. 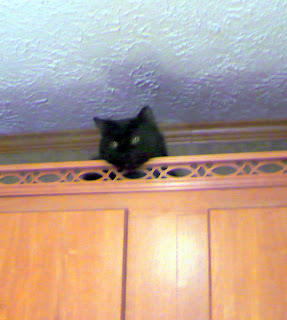 Back to choices. Three years ago when the first group stole my heart, I made a very simplistic and moralistic decision. But only as it would apply to me. I thought that I really would not like to see anything eat these kittens. And I decided to give up meat. As I said, it is just my decision. I don't want to be righteous.I know I could be. It only applies to me. I grew up around farms and I have scarfed down my fare share of flesh. I just don't want to do it anymore. It just doesn't feel right for me. I have the luxury of being able to do so. Others do not. And others don't want to.

When Debbie invited me to blog about eating vegan one day a week it had never even occurred to me to eat vegan. I have to say that it has been a lot of fun. And it's made me think about the choices I make. I'm not perfect and they are not perfect choices. How many earthworms died tilling that land to grow soybeans for my tofu? Is that honey bee harmed to get my morning sweetener? I don't know. I do know that I enjoy cooking and eating and trying new things. And eating vegan one day a week is not going to harm me. It has opened up a new dialogue. New horizons. I urge you to try it and have fun with it!


I'm off to cook some scrambled tofu from Isa's kitchen. It really is fabulous and I would never have tried it had I not committed to eating vegan one day a week. Then to play catch with one of my cats who retrieves. I throw the ball. He runs and gets it and brings it back.I kid you not. Then we watch for deer and birds. These cats are after all ,not vegans. 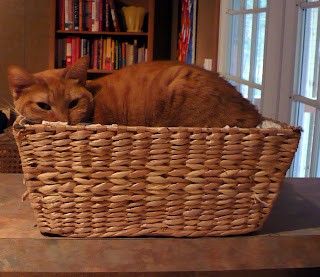 Posted by johnfordfw at 4:45 PM