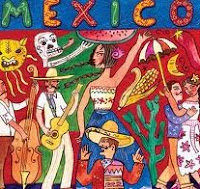 When you live at the southwestern end of the  United States, just a hop, skip, and a jump from all the wonderful flavors of Mexico, your senses become addicted to things like hot sauce, jalapenos, adobo, masa, chorizo, and a whole bunch of other foods I'd never heard of during my Midwest childhood. But in San Diego, Mexican food is a given and it seems there is either a fast food place or good old Mexican restaurant around every corner. What's more, they are always filled with people waiting in line to get their "fix" of tongue-numbing food.

I have my own favorite hang-outs. They are places where the food is tantalizingly hot but not to the point where my mouth burns or my lips hurt. My son frequents the places that set the taste buds on fire. He and his dad used to have contests to see who could eat the hottest Mexican food. It was usually a draw, though in all, my son could eat the hottest of the hot and live to tell about it.

As for me, a transplanted Minnesotan who grew up on farm food, I've gotten to the point where I have to have my Mexican "fix" at least weekly--if not more often. What can I say? I love those flavors. And while my mom cooked with a lot of spices, they weren't the ones that make Mexican food smell and taste like I've been transported to some far away, exotic land. Over my more than fifty years of marriage, I collected recipe after recipe for Mexican food, usually from friends who were Hispanic or knew someone who was. It was from them that I learned how to make things taste the way they should. In this past year, being vegan by doctor's orders, I've tried to think up ways to retain the flavors I love while doing away with meat and dairy. It's been a real challenge.

A few things made the transition easier: I never met a bean I didn't like; I adore all grains; every vegetable in the garden is my favorite;  fresh fruits are as good as dessert; and chilies used in moderation are lip-smacking good. 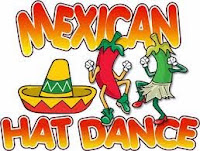 I'll admit that I had to learn how to fix tofu so that I liked eating it and soy milk took some getting used to. Other than that, things in the kitchen have moved along at a good pace and I've enjoyed the challenge of creating vegan dishes that suit my personal taste buds. Experimenting in the kitchen has turned out to be fun--especially for one who hates to cook. The thing is, I've always enjoyed a good challenge. I think today's recipe is a gold medal contender. Give it a try and tell me what you think. I bet it sets your feet a'dancin... 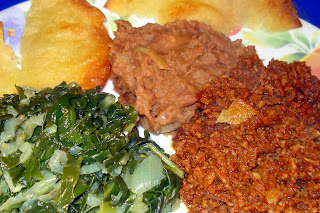 In a small skillet, brown the onion until it is translucent. Add the garlic and vegetable broth. Stir one can of refried beans slowly into the mixture and mash with a fork till the ingredients are well-mixed and the beans are a bit on the juicy side, but not soupy.

1 bunch of Swiss chard or kale or any other preferred green
1/2 of a white onion, sliced
4 garlic cloves, minced
1/2 tsp. red pepper flakes
Salt and pepper to taste

Clean the greens and chop into small pieces. Put them in a large skillet, along with the rest of the ingredients and stir fry everything until the greens are well wilted and the onions are soft. Add a dash of Tabasco sauce if desired.

Place the following ingredients into a quart bowl:

Mix everything together and add 1 cup of textured vegetable protein, TVP, to the bowl. TVP is available at your farmer's market. Stir until the TVP is well settled into the liquid. Ignore it for 30-40 minutes so all the spices have time to do their job.

The faux chorizo mix will still be a bit saucy, but don't drain off the liquid. Put the mixture into a skillet lined with 1 Tbsp. of vegetable oil and cook on medium heat until the liquid reduces. Stir often to keep the TVP from burning.

I served this dinner in components. A big spoonful of refried beans alongside another big spoonful of the chorizo, which was alongside a healthy spoonful of spicy greens. I served hot, fried corn tortillas on the side to be used as utensils for scooping up the food. The two others who ate with me want the recipes. I'd say the meal was a success.

Serves 2-3, depending on how hungry everyone is.

The chorizo recipe has been adapted from The Happy Herbivore cookbook and altered  to suit my personal taste.