One false start just reminds me that even a pro-toaster can destroy breakfast. Me being the professional, I thought. One of my rules for cooking eggs, when I am on an “off vegan day” is to “baby-sit” them because of their short cooking time. Leave the room and I am guaranteed hard yolks. Well when it comes to toasting, I thought I had it mastered. 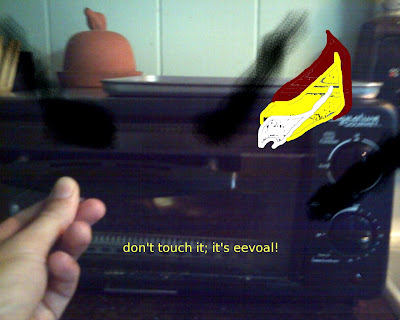 I suppose I could sugar coat it with the fact that I wasn't actually toasting bread, I was toasting tortillas, and apparently they toast in a logarithmic manner. It seems to take forever to get them to heat up (the high heat latency of the oil) however once there, they can burn fast. I love getting the 10 or 20 ct tortilla packs because on an occasion as such, it is not such a bad thing to start over- unlike when one buys just 2 deli bagels to savor and one creates an onion charcoal with a hole in the middle.

After a second attempt, and after venting the house, and my pre-caffeine thoughts, I had success. My simple breakfast was the old standby hummus, along with quinoa and medium salsa. Very satisfying, and humbling to speak of it minimally.

Lunch was much easier- take out veggie Mei Fun with Tofu and a veggie spring roll. Courtesy of the infamous “mean Chinese lady” who is neither mean, nor Chinese, to my knowledge. I used to get veggie Mei Fun about every other Friday however because I eat veganese so much all week I opted for the tofu. If you are active, including brain activity, make an effort to include protein whenever you can. Veggies, being so low in calories, can easily trick you into eating way too little if that is all you are eating. Quinoa, legumes, tofu, tempeh, are good sources of protein and help prevent hitting the wall at 2:00pm. When I first started eating vegan full time, I dropped several pounds in the first 2 weeks because I simply didn't eat enough- and I wanted to sleep! Now that my diet is more balanced with protein sources, and bulky foods like rice and lentils, I've avoided the “lettuce for brains” syndrome I once had.

I was looking forward to having Vegan day on a day that I was traveling. I expected the biggest challenge from fuel stops; I wasn't planning on making any special restaurant stops, nor did I have the time (or cash, really.) So convenience store food it was- and it was slim pickins', foreshore! For one thing, there is no soy milk at the coffee counter. Being a coffee snob, I've come to know soy milk as common place where coffee is served- even my grocer has soy milk on free coffee Saturdays. Rice milk seems to be the gem in the rough- I'm impressed when a coffee shop can offer that. But at a gas station? You're lucky to get kosher coffee- probably too many insects if you know what I mean. So I hope I didn't screw up too much from bypassing “FourBucks” to get a dollar cup of joe. So sugar will have to do. Then what are my choices- candy bars and chips. I can get 5 slices of apple for 99cents at the gas station deli. Screw it, I've got leftover Mei Fun in the whip. So I wolfed it down while pumping gas under the shade of the fuel island- not using A/C today to a) save gas b) save energy c) save money and of course d) prove that it doesn't work anyhow; it's been broken for at least a year.

For a snack down the road, I chose trail mix that was purchased at the local co-op. I actually toasted the mix (successfully) and discovered that the pumpkin seeds will puff up when toasted- 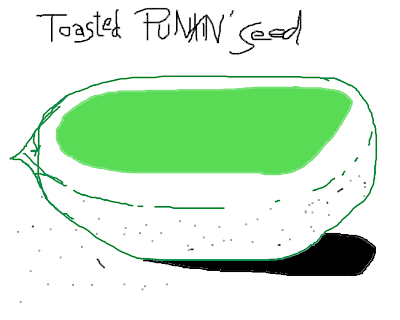 and then they are so good.

After my trip, I made the weary mistake of going out for sushi. NO PROBLEM. Avocado roll, sweet potato tempura roll, seaweed salad, and a whiskey sour. All is good. Due to being on the road I didn't actually make anything today, so look forward to recipes in next week's installment. Also topped off the night with homemade gluten free oatmeal cookies and rice milk. Checkit.
Posted by Ben at 8:17 PM