This weekend a friend of mine lent me a cookbook she found at a garage sale, Charleston Receipts. Published by the Junior League of Charleston, South Carolina in 1950, it is a compilation of collected recipes(receipts) from members collected over the years. The foreword starts out with a poem lamenting the loss of servants and the necessity of housewives having to learn to and do their own cooking.

There was a time when folks had cooks, 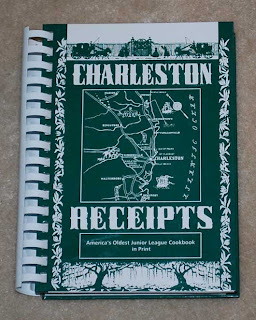 Who never did depend on books
To learn the art of cooking.
The help knew all the tunes by ear,
And no one dared to interfere;
They brooked no overlooking.

But times have changed, for worse we fear,
Housewives handle the kitchen ware,
And must learn how to cook.
With that in mind, we've dug and delved,
And unearthed treasures long been shelved,
And placed them in this book.

It goes on some more but you get the drift. Oh for the times when we all had cooks!

The book is full of recipes with regional specialties like shrimp, oysters, fish and venison and the ever present butter, mayonnaise, cream cheese and cream of mushroom soup . Often times all in the same recipe. Silhouettes of black serving women(think Aunt Jamima) doing various chores adorn each page. Each chapter opens with quotes such as the following:

It was a different time.Times have changed. But I find old cookbooks such as these a fascinating look into what people were eating and how they lived. As far as I can tell, the only recipe that could be considered vegan is below. Even the vegetable dishes were covered in dairy or meat including the salads. The "shortnin" in this recipe and in "Shortnin Bread" was actually lard. I substituted shortening for the lard. 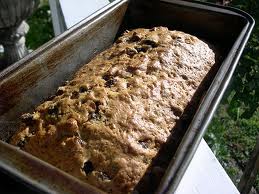 Boil together sugar, water, lard(shortening here), salt, raisins and spices for five minutes. When cold, add the flour and soda dissolved in a teaspoon of hot water. This makes two loaves, bread pan size. Bake in 324 degree oven about 45 minutes. This cake is good texture and keeps moist for some time.

Mrs. John Laurens (May Rose)
Posted by johnfordfw at 8:05 PM