Let There Be Cake 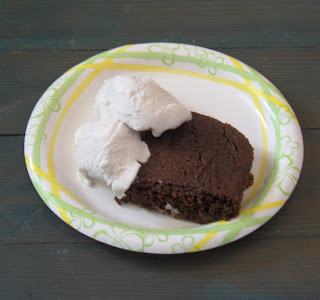 Let’s not mess around today. Let’s get right to the reward, CAKE. Make it first thing in the morning and it will be ready to frost your productive day.

My first attempt at this cake was tested by the resident tasters and deemed a cross between a bran muffin and a chocolate cake. “A hippie cake,” I heard someone say. So for my second attempt I ground the flax seed in my coffee grinder and now it is Chocolate Cake, with none of the disturbing adjectives.

Maybe you have experienced flax seed. If you leave it in water a little while it gets slimy. The Elder told me his sisters used it as a gel when they set their hair in the 30s. I suspect it works as a binder in this cake recipe, since the egg is missing.

Easy Chocolate Cake
Adapted from a friend of a friend’s recipe
Featuring the absence of Gluten, Egg, Soy and Dairy

Bake 25 to 30 minutes or until tester inserted in the center comes out clean.

When I first read to add the white vinegar and quickly stir, I thought of the science experiments of my elementary school days. Would this be a volcano erupting? I must learn a little more food science. My suspicion is that the white vinegar reacts with the soda and helps give the cake some lift. It isn’t a big lift, but the texture is light. The chocolate chips weight it down some, but I wouldn’t leave them out. You could, they weren’t in the original recipe.

I didn’t frost my cake. Too much sugar for me. With a scoop of Purely Decadent Coconut Vanilla Ice cream, it was dessert enough.

Back to the beginning.
Breakfast. Fruit – fresh pineapple, fresh orange and fresh plum – a little of each.
Leftover green salad from last night’s dinner – red leaf lettuce, avocado, garden fresh tomatoes, red and yellow, oil and vinegar dressing. Who said breakfast had to be cereal?

Snack: I was reading a healthy snack article in a Real Simple Magazine at the library and there it was, Humus and Crudités. Doesn’t that sound fancy? Raw vegetables become so sophisticated if you call them Crudités. So, put your pinkie finger up and enjoy a snack with the upper crust. Raw carrots, celery, Jicama, broccoli, cauliflower, whatever, dipped in humus to add a little protein and you are energized for another 2 hours.

Lunch: The plan was to make Tomato – Cucumber Gazpacho Soup from an old August, 2006 Sunset Magazine. Alas, no tomatoes in the pantry. Great excuse to take a trip to Lassen’s Health Food Store in Ventura. The Artist had told me that they have a deli that I’d want to check out. I called her to see if she was available for a little field trip. She needed no encouragement and she had plenty of fresh tomatoes from her garden that I could use in the soup. Since I no longer needed the tomatoes, the focus of our food adventure became The Deli. The Gazpacho Soup was postponed to the Dinner hour. Lunch would be found at Lassen’s Health Food Store Deli.

Let me insert a comment here. Retailers beware, every shopper is a critic. Service at Lassen’s was lacking. I call them Slackers, The Distracteds, The Saunters. The Artist thought maybe it was the time of day, but I think Service can’t have a time of day. The food market and the deli were superb. In spite of the service issue I have to say, “Trader Joe’s Look Out, you have stiff competition."

For lunch I chose Dolmas (Dolmathes, Dolmades), grape leaves stuffed with brown rice, tomatoes, tomato paste, herbs, cilantro, red pepper. I could buy them at the deli counter or already pre-packaged, 4 in a package. Then I found a vanilla mousse made with coconut milk, dates and vanilla. With a cup of coffee, I had an odd lunch combination. Next time I will know what to expect and not be quite so compulsive in my shopping.

My next trip to Lassen's will be a little more relaxed. There is much to learn there. It is definitely a vegan's solution to convenient meal planning.

Email ThisBlogThis!Share to TwitterShare to FacebookShare to Pinterest
Labels: Cake