Being outsourced, or rather, allowing a job to be outsourced, or otherwise made obsolete, is nothing new. What is new is the scale, and the visibility of this phenomenon. And by scale I mean time as well as quantity of jobs. Because it is very possible that in the past a lifetime career became obsolete once the career had turned into a retirement. Typesetting for example- there used to be warehouse sized rooms full of metal tables that men & women toiled over just to put together the text for a book or a newspaper. Then one day, dye-sublimation occurred- (for illustration; I'm guessing dot-matrix came first, or was it the daisy wheel...) or was discovered- or invented if you will. And poof- the typesetters kept working, as dye-sublimation was an expensive, difficult to work on, by all means exotic technology. Easier to keep the craftsmen and wait until the price of technology dropped. But now, it's more about the knowledge- because knowledge can be transferred, or taught, to those in desperate situations- and it is easier to find people in desperage, and easier to harness the knowledge. Back in the '30s, you could possibly teach typesetting to someone living in a jungle, and that person could eventually become a master tradesman (or tradesperson) at a fraction of the salary of a deep Chicago typesetter. However, to get the papers on the doorstoops of Chicagoans by 5:00am, would be impossible for the typesetter in the Congo. Now it is not so impossible, and not so unheard of. With that said, why are people so eager to give up their knowledge? Why do they leave what may have taken them years and thousands of dollars to learn, so unguarded? Then again, with the proverbial big ear of the global web listening, it only takes one awoller to sink the ship for the rest of those in a guarded profession. Hence, the beginning of the end of the hierarchy of knowledge. The only difference between a professor and a person who has studied the same material for years is that someone called the former “professor” on a sheet of paper. That's it! But then, how does on trust the latter to know what the hell he is talking about? Well, we all trust the internet so much now- if we have a question, we punch it into the collective mind of brother and boink- there is an answer on the screen, and we trust it. Why? “Because I googled it.” Ask an authority on a subject a question, and we second guess him!!! We double check his statements on google! Especially doctors!


This dish is a little unorthadox as it has potatoes and rice simultaneously, however it is worth trying- I'm telling you.

Heat about 3 tablespoons of oil in a large skillet on med-hi heat; once a bit of onion sizzles when placed in the oil, carefully add the carrots, onion, and potatoes, then stir fairly constantly to allow the ingredients to cook thoroughly and evenly.

Once the potatoes are have softened to a state of edibility, add the spices and the coconut milk, then add the water. For a thicker sauce, omit water and add a full can of coconut milk. Now it is time to add the green pepper, so as to not overcook, the tofu, in order to bring it to temperature, as well as put the broccoli and garlic on steam. As soon as the green pepper is the texture you like (crunchy vs soft) and just as soon as the broccoli starts turning color, it is time to serve. Plate it with a bed of rice, then the curry, then some broccoli branches & crowns. 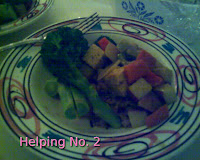 Low in salt but high in spice, I added a little salt out of habit but it really didn't need it.

If you are typically averse to spicy Indian food, I'd guess one could omit the cayenne and still get away with a flavorful meal. The above serves 2 hungry vegans; so double it if you want leftovers or if you are serving a neighbor as well.
Posted by Ben at 7:45 PM