I actually like using seitan in my vegan recipes. And no, it doesn't taste like chicken or beef or pork  or any of the other "meat" products out there, but when it's part of a great recipe, those chunks of seitan have so much the mouth feel of meat that they can fool the brain.

Now you may be the sort of vegan who doesn't miss meat. But I grew up eating it and while I now gladly forgo it in order to follow doctor's orders to avoid a possible fifth intestinal surgery, adding seitan to my recipes gives me the satisfaction of biting into something that feels like a chunk of meat. Besides the psychological pleasure I derive, seitan is easy for me to digest--whereas the real thing was partly responsible for too many intestinal surgeries. But that's another story.

In the last year and a half I've doled out more than a few bucks buying seitan at my local health food store. It was a product I always kept in the refrigerator in case whatever recipe I was working on would benefit from the taste of "meat." But since my budget is tight, I began wondering if I could make the seitan myself. I questioned my few vegan friends and from their answers, I decided that I didn't want to tackle such a time-consuming project, especially when the general consensus was that the end result was just too nasty to eat.

Then I bought Chloe Coscarelli's book, "Chloe's Kitchen" and right there in the back was a recipe for seitan. The reason it intrigued me was because every recipe of hers I'd tried had been a blue ribbon winner. Surely her recipe for seitan would follow suit. The ingredient list was small and the directions were simple. I changed only a few spices to suit my personal taste and doggone if it didn't come out perfect on the first try. To make things easy, I mixed all the ingredients in my food processor (one of my tweaks) and had that ball of slippery dough in the cooking pot in less than ten minutes. I dare you to give this a try. My guess is you'll never spend the money for commercial seitan again. The home made stuff costs much less per pound and tastes way better. Who can argue with those odds?

Into a food processor bowl put: 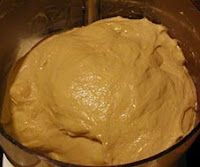 Knead the dough until it is smooth and shiny, about 5 minutes in the processor. Do not under knead.

The dough will feel tough, unlike any other dough you've ever made. Relax. That is how it's supposed to be.

Allow the dough to rest 5-10 minutes. Cut it into as many pieces as you wish. I cut mine into three sections so I'd have a ball of seitan ready for use in any recipe I might choose to make.

While the dough rests, get out a BIG pot and fill it with:

4 cups of vegetable stock or no-chicken broth. I used the no-chicken for the added flavor to the seitan.

Stir to combine. Add the dough balls to the cold broth. Bring to a boil then reduce the heat to low. Cover the pot and simmer the dough balls for 30 minutes. Be sure you use a large pot. The balls expand during cooking and become rather like gigantic dumplings.

Allow the seitan balls to cool in the broth.

Once thoroughly cooled, I put my three dough balls into separate freezer containers, along with enough broth to cover the seitan. The product will last up to 4 months frozen; about 3-4 days refrigerated.

I found that freezing the seitan increased its meaty mouth feel, though I can't explain why.

As is, the seitan has little taste, rather like a mushroom. But it's porous texture allows all manner of spices and sauces to sink into it and so far I've been delighted at how it can take on the flavors I love. I can make it taste like chicken or beef. I can slice it as I would a roast or grind it into taco meat. The herbs and spices you surround it with will determine the end flavor.

The homemade seitan is only the beginning. I defrost a ball of prepared dough then either cook it atop the stove or in the oven, turning it into stew or chicken picatta or teriyaki steaks. I am limited only by my imagination.