It was all set in my mind. I would make Monday Hummus day for a month or two. I would cleverly begin with something like: "Class, today's spelling word comes from the Arabic word for chickpea or garbanzo bean. It's pronounced 'HUM us'. How do you think it's spelled?" bla bla bla and then the finale, after they have all raised their hands and taken a stab at spelling Hummus I would say, "You are all right. It's spelling is very unstable. You can spell it: hamos, houmous, hommos, hommus, hummos, hummous or humus. That last one, humus would be confusing for many Americans, since we have another word we spell humus and it is pronounced 'HUE mes' and it means decaying vegetable matter."

Alas, at the library I discovered that there is more to a chickpea than

hummus. It would be wrong to concentrate on hummus and leave out the history, the stews, the soups and salads. The Chickpea deserves star treatment, after all, it had a prominent role in the 2009 movie "Cold Souls" as the soul of Paul Giamatti. Paul Giamatti playing himself. (I saw that movie one too hot afternoon at my local art theater and I must say, well, I don't know what to say. I like Paul Giamatti, and I do think about this movie once in a while. Was it deeper than I think? Did I miss the punch line? Why would Paul Giamatti agree to do that movie?)
And so, for awhile, Monday at 7 Shades will be chickpea day. Please join me. Participate even.
It all started in the Mediterranean. Which leads to the question, what exactly does that mean?

Every country that borders the Mediterranean Sea qualifies. And our Chickpea is a big player. Look at them all. Now that's diversity. I think we are in for some fun.
Today we are going to Morocco, for Chick-Pea Soup from Martha Rose Shulman's "Mediterranean Light" . Why? Maybe because I read from left to right. And I'm looking at the front row first. I don't know why. I think it's because I have everything in my cupboard to make this soup. No shopping required this time and it is looking like rain.
serves 4-6
2 15.5 oz cans chickpeas with liquid (Cooking chickpeas from dried peas, takes a very long time. Maybe next week.)
1/2 cup chopped fresh parsley
1/4 tsp freshly ground black pepper
1/4 tsp powdered saffron
1/4 tsp ground turmeric
1/4 tsp ground ginger
1 tsp ground cumin
1/3 cup grated onion
1 tablespoon tomato paste
1 large potato diced
1/4 to 1/2 tsp harissa or cayenne pepper
1 quart water
salt to taste
bring to boil, then reduce heat and simmer about 1 hour, partially covered
put 2 cups of the soup in the blender and puree
return to pot and mix well
just before serving stir in:
1/4 cup lemon juice
1/4 cup cilantro. 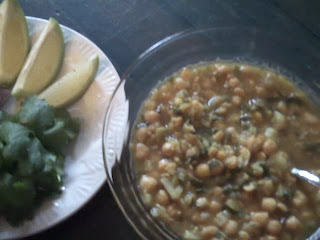 I prefer to put the lemon juice and cilantro on the table and let everyone add their own to taste.
This is the end of the first Chickpea Monday. Coming up will be history and the crop and recipes.
Posted by Sonsie A David at 9:40 AM

Email ThisBlogThis!Share to TwitterShare to FacebookShare to Pinterest
Labels: Chickpea