The snacker and the slacker

It being Monday, it's another episode in the garbazo bean journey. Tonight I dedicate my blog entry to Spencer, a timid, friendly, warm companion. Clumsy, fat, adorable, affectionate, a slacker. Begin the violins.

Spencer would sit in my lap and share a movie and a can of garbanzo beans. Yes, right out of the can, we had no shame. He’s gone now, the dinner of some carnivore in the neighborhood one moonlit night. Spencer was very slow, never could jump off the couch, would stand with 10 toes hanging over the edge of the cushion and look at the floor for 10 minutes before he dared stumble forward and land all goofy on the floor. (He was pure white, his sister I named Hawk, she is all black and with me still. Get it. Spencer and Hawk. Robert Parker.) Spencer, pure white, long hair, slow and stupid was no challenge for a coyote or hawk or owl. I don’t know who got him. (The circle of life.) But he was a slacker and a garbanzo bean snacker. Today in his memory, we will go Greek and make roasted chickpeas.

According to Susanna Hoffman, the author of “The Olive and the Caper”, the ancient Greeks wrote about whole roasted chickpeas shared around a fire. Not a corn nut, but similar in texture, a garbanzo bean snack is an oven away. 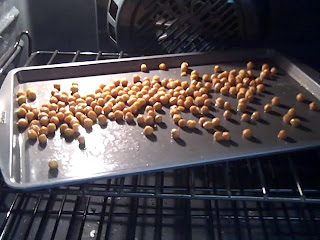 I tried it two ways. The first batch I took the long way. Soaked a cup of organic Chickpeas overnight, and then cooked them until they were soft. (We have hard water so it takes longer, about 2 hours. Ugh. What does that do to the electric bill?) Then I drained them and let them air-dry while I heated the oven to 350. The instructions say to roast for an hour and thirty minutes. So I poured a little EVOO on a jelly roll pan, dumped on the air-dried peas and shook them around to cover them with EVOO, then slid them into the oven. After 30 minutes I took them out and gave them a little shake and sent them back in for thirty more minutes, took them out, gave them a shake, and left them in for the last 30 minutes. A couple of the peas were very dark, like they were not edible so I picked them out than threw them out. While they were warm, I generously dashed them with salt.

The result was very crunchy. Too crunchy. Too long in the oven. Watch them carefully and find just the right time and you will be fine. They are easy to check, being so small you can pick one out, roll it around in your hand a bit and give it a taste. Mostly you are checking for crunch. Just the right crunch. Somewhere between a jelly bean and a rock. Maybe like a M&M Peanut.

The second batch I took the short cut. I bought a can of organic garbanzo beans, drained them and proceeded as above. This time I was diligent. I checked doneness after 30 minutes when I gave them the first shake. Then every 15 minutes. After 1 hour they were perfect. I love them.
A vegan with food allergies needs snacks.