Who's counting? It seems that since high-school graduation, time has gone into some sort of cosmic blender; the linearity of childhood & early adult routine get pureed along with the chickpeas. The more one strives to build a routine and stick to it, the more mundane and faster the days get! And at that point we measure our time-outs by those moments; the moment on the morning of your first day of vacation, when you are awake before everybody else. You go outside, and upon seeing the sun breaking over the horizon, you inhale deeply and you get your moment. Those become the new ticks on the measuring stick of time. Are those the only ones? Of course not; this time of year where I am located, when the heaters start kicking back on and the leaves fill the driveway in a flash-flood of yellow and red, those moments are of culinary inspiration. Soup. Bread. Desserts baking. Too bad you gave that up when you became vegan.


Mix up the dry ingredients in a large bowl; mash up the bananas in a large measuring cup with a fork, then mix in the oil, vanilla, and agave. Add the mush to the bowl with the flour and all, and mix with a mixer on low speed or with a wooden spoon until batter consistency is even. Grease and flour a standard bread pan, and pour in the mixture. Place in a 350degF oven and bake for 1 hour. 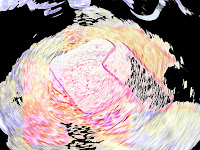 What I love about banana bread is that it puts into service otherwise ruined bananas (usually from being too close to the heat!) and adds one of those “moments” to the week. Out of the oven, the crust is intensely contrasted to the inner bread; and begs a glass of rice milk. After a day or so, the contrast gets blurred as it is all soft, and goes best with coffee. I've been able to carefully cram a piece of banana bread into the toaster and crisp it up, then add vegan “butter” spread. The major difference from this and traditional recipes is the omission of eggs, however the flax-meal is an excellent protein-rich substitute. *If you've never used it before, simply add hot water to the flax-meal in a small bowl and allow to sit for a few minutes before adding to the batter. So, there should be at least 3 moments from this recipe; the aroma of fresh baked, the first slice, then the breakfast slice (if there is any left from the night before!) Hope you enjoy.
Posted by Ben at 5:59 PM