LA and I made Falafil for lunch. We thought we were pretty adventurous at the time. There was a box of Falafil mix, just add water, in my cupboard. We made the little meatball things, deep fried them and put them into pita halves with a dollop of yogurt. We loved them. As we pushed back our chairs and patted our bellies, we said, "I falafil'. It still makes us laugh.

Falafil comes from Lebanon. It's chickpeas, onion, potato, parsley and spices all ground together and formed into little patties and deep fried. You can buy the mix like LA and I did or you can follow one of many recipes. Today, I went to the little fast food Greek restaurant down the street and bought them. 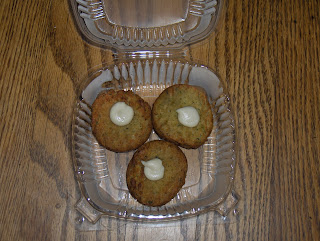 That's a dollop of hummus in the picture. More chick pea. Chick pea on chick pea.

All day I've been like a billiard ball, slamming into ideas and subjects that send me ricocheting off in a completely new direction. Starting at the Library, finding a falafil recipe in a Lebanese cookbook, then learning from the Librarian that Ralph Nader is Lebanese and that his Mother wrote a cookbook titled, "It Happened in the Kitchen". So I asked her to find it in a CA library somewhere and order it for me. I never thought of Ralph Nader having a mother who might guide his eating habits. But it seems she is quite famous in her own right, an activist and civil servant. Her cookbook is as much about her thoughts on child rearing as on food.

Then I got interested in Ralph Nader, found his book about What Happened to the Electric Car. When I asked Netflix about the man, there was a documentary about Ralph Nader.

At the Writer's Almanac the poem is about the vegetarian George Bernard Shaw. It doesn't say outright that he's a vegetarian so I googled GBS and vegetarian and found quotes by him and many other celebrity vegetarians. And there's Paul McCartney. Oh yes, I remember, he's part of the Meatless Monday group.

I remembered an article I read last Friday in the NY Times that made me think hard about vegan vs vegetarian vs omnivore. I pondered the meaning of it all. So many things we don't know. So many forks in the road. Stay loose, I tell myself. Keep searching.