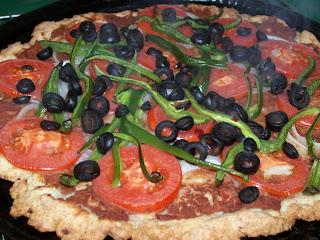 It all started with no room in the pantry for the vinegar bottle.

Tuesday became pantry cleaning, sorting and reorganizing day. Once I got going it became interesting. I ate a bowl of puffed millet because it was there. Puffed millet is disappointing to me because it's so soft. Spongy almost. Spices were on the baking shelf, flours were everywhere. I have quite an eclectic selection; teff, buckwheat, sorghum, rice, tapioca, millet, corn.... and there, amongst the flours, I found a zip lock bag of gluten-free Pizza dough mix from an older post (August or September). Pizza would be Wednesdays vegan lunch.

Today I mixed up the crust, baked it for 15 minutes @ 425 degrees, spread it with refried beans, arranged thinly sliced onion and tomato, threw on a small can of black olives (didn't remember I had that until yesterday), sliced up a poblano pepper and sent it back into the oven for 25 minutes.

This is when cheese comes to mind. Cheese is never in my diet, but guacamole and pico de gallo are. This was one good pizza. I imagine I could have thrown some shredded lettuce on top and called it a tostada, but a salad on the side was a better idea.

Pizza and salad. A very fine lunch.
Posted by Debbie at 12:47 PM

Email ThisBlogThis!Share to TwitterShare to FacebookShare to Pinterest
Labels: Pizza