Who would've thought of Jonathan Winters being capable of drama; I always thought of him as a comedian. However his oration of A Christmas Carol on the radio was incredible; I'm sure I was moved- and it was interesting to find out that it was a special edition that Charles Dickens wrote for his book tour to be read in front of an audience. At one point I basically forgot the radio was on and became totally immersed in another time. Strangely, somehow images of Scrooge McDuck crept in from time to time.

We won't be having a Christmas turkey this year as was sought after in those times, and in those times it was difficult for the common person to obtain such a feast unless they still farmed. Ah, the coal-fired industrial beginnings to our problems today.

For our holiday spread we are including variations of “meatballs” sans the meat. Here is one:
Olive balls; an old holiday treat usually made with cheese and flour, that can be made totally vegan and gluten free with this variation. Olive balls are one of the easiest; the batter can be made the night before in preparation for the next day's festivities. 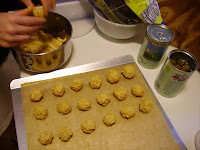 Add everything except for the olives to your food processor and blend until a thick batter forms. Carefully coat each olive individually before placing on parchment paper on top of a cookie sheet. Bake at 350degF for 20 minutes or until crispy.
Posted by Ben at 11:48 PM