Christmas has come and gone and I for one am grateful it’s over with. Not that I don’t enjoy the holiday season but if I eat one more sugar laden baked good my belt is going to pop and my dentist is going to pop me. And, the dinner I made on Christmas day was complete disaster.Alright, I don't enjoy the holiday season. I did receive a wonderful Vegan cookbook from David’s sister that I am really excited about, Vegan with a Vengeance by Isa Chandra Moskowitz. She bills herself as “America’s Most Awesome Vegan Chef and co host of The Post Punk Kitchen". The Post Punk Kitchen is a public access television show in Brooklyn. There are links from her website to the videos. She is also author of Vegan Cupcakes Take Over the World and Veganomicon. I have not cooked anything out of the book yet but the recipes sound wonderful and she sheds a lot of light on vegan cooking techniques. And trust me, she is funny. Really funny!

At any rate, she has a few recipes in the book that include nutritional yeast. I had heard about nutritional yeast but never had it. My friend Pam, bonne vivant and floral designer extraordinaire, turned me onto it this weekend while we were at the coop in Fayetteville. She cooks with it and gives it to Moon Dog. Moon Dog is her dog. Moon Dog is THE Dog. I don’t know how to describe the taste. It is kind of buttery, kind of cheesy, it kind of tastes like chicken! The yeast, not Moon. I think it would be incredible sprinkled on popcorn. It’s tasty right out of the package. And my cats like it too! 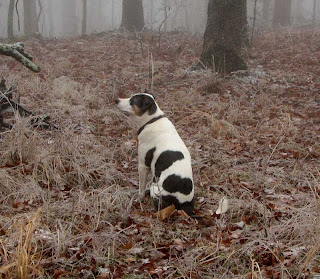 So tonight’s meal includes nutritional yeast. I did a search for recipes on the web and am making Macaroni and “Cheese” from Sundance Natural Foods’ website with some modifications. I am adding stout to the sauce because I think it will be a nice addition. And, it’s cold and snowy in Dallas right now and I am in the mood for a Guinness.

Cook 3 1/2 cups elbow macaroni until al dente. In a saucepan, warm 1/2 cup olive oil. Beat in 1/2 cup organic whole wheat flour with a wire whisk and continue to beat over a medium flame until the mixture (called a roux) is smooth and bubbly. Whip in 3 cups water, ½ cup stout,1 1/2 tsp. salt, 2 Tbs. soy sauce, 1 1/2 tsp. garlic powder and a pinch of turmeric, beating well to dissolve the roux. Bring it to a simmer and cook until it thickens and bubbles. Then whip in 1/4 cup olive oil and 1 cup large flake nutritional yeast. Mix part of the sauce with the drained elbows, put in casserole dish, and pour a generous amount of sauce on top. Sprinkle top with paprika(I used Hungarian Paprika from Dallas Spice Market which tastes a lot better than the generic stuff) and bake for 15 minutes in a 350° oven . Put under broiler for a few minutes until "cheese" sauce gets stretchy and crisp. 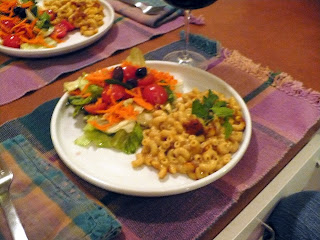 Observations? I liked this a lot! No it did not taste like it was loaded with cheddar or gruyere but it does have a "cheesy" taste and a nice smooth consistency. Next time, I add a bit of dry mustard to the sauce and perhaps a bit of cayenne for some zip. The Guiness added a bit of a smoky taste. Not unpleasant but it might be fun to try it with sauterne. But the recipe is a keeper and the yeast adds amino acids and lots of other good things.. I hope you'll try this!
Posted by johnfordfw at 5:14 PM