Eggplant And The Best Caponata Ever 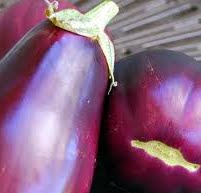 I love eggplant. Always have. Mom used to slice it into circles, sprinkle with salt, set the slices in a colander and let the " bitterness" run out. I don't mess with all that. I don't know, maybe eggplant growing has changed since I was a kid. Maybe the vegetable isn't bitter at all and mom just thought it was. Once the slices were ready for cooking, she'd give them a good rinse under cold water, dry them well, dip them in beaten egg then into crushed cracker crumbs and fry them in a whole lot of butter. My sisters and I always fought over who got the most and if but one slice was left on the serving plate, we had to draw straws to see who got it.

In all those years since the 1940s, we've learned a thing or two about cooking healthy. And while I would dearly love to eat eggplant fixed mom's way, I don't allow myself to do it. What I have discovered though is that eggplant is just plain good the way God made it. I do tend to peel it because to me, the peel is difficult to chew. Other than that, the vegetable is good baked or stewed or grilled or roasted.

I've tried caponata before and truthfully, never thought it was anything to rave about, let alone take the time to make. That is until I saw Chef Anne Burrell cook it up on the Food Channel. Doggone, the recipe was vegan and the only thing I tweaked was to add some tofu to make the dish a complete meal. I could barely wait to get into the kitchen and if you've known me long, you know that I absolutely hate cooking. But something about this recipe called to me. And guess what? It is undoubtedly the best caponata I've ever eaten--bar none. Thanks, Anne. 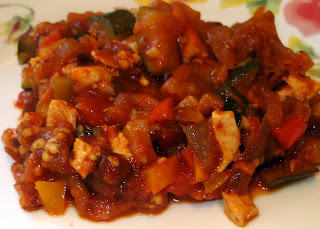 Heat the oven to 400 degrees. Toss the cubed eggplant with the olive oil, salt and pepper and lay it in a single layer on a sheet pan. Roast it for 15-20 minutes.

Coat a deep pot with olive oil. Toss in the onion and crushed red pepper. Season with salt and pepper. Cook over medium high heat until the onions are soft. About 8-10 minutes.

Add the fennel, celery, garlic and tofu and cook another 5-6 minutes. Stir in the peppers and cook another 6 minutes. Add the zucchini and season with salt and pepper once more. Cook over medium heat until all the vegetables are soft. Toss in the eggplant, the water and the tomato paste. Cook until the water is evaporated. Dissolve the sugar in the vinegar in a small bowl and add it to the mixture. Stir in the raisins, capers, nuts, and mint. Cook another 5-6 minutes.


Serves 6-8 and while I served it hot with garlic bread, it's good cold too.