Since my last post, my friend Pam informs me that nutritional yeast is also called Hippie Dust. I hadn't heard this before as I missed the hippie era. But just barely. Hippies were all around me as a young teen and undoubtedly had an influence on my thinking and exposure to a larger world. This was important to a kid who grew up in a town where the last thing of significance that happened was the American Revolution. Well, that and a few juicy murders. I wonder how the world views Vegans and think it is probably a perception of wide eyed, new age optimists who will soon grow tired of being do gooders and turn into country club republicans. This past week has been a quest to explore hippie dust and observe vegans in my very limited sphere.


On Sunday I ate vegan although it is not my scheduled day. We have gotten bored with the choices here in the hood and had lunch at the Spiral Diner that opened recently in Oak Cliff. The staff was almost universally tattooed and sported those god awful earrings that stretch your lobes down to your shoulder blades. Lots of black clothing and more than a few nose rings, altogether very goth like. The place was packed and I don't think you could look at anyone in the room and say definitely that they were or were not a Vegan. No one looked other worldly.There were a couple of rich white ladies in the booth next to us in full length fur coats, so I am not sure they got the whole vegan thing. But they looked like they were enjoying themselves. I am not terribly fond of the menu there because everything seems so complicated. So many ingredients, lot's of hippie dust and fake sausages. I did manage to scarf down a piece of vegan blueberry pie.


That night I made Scrambled Tofu from The Post Punk Kitchen. Now there is a chick with a great shtick. Lots of fun and lots of attitude. No other worldly kumbayisms here. She knows who she is, what she believes, and has a hell of a time doing it. I was intrigued by the recipe. It included hippie dust and I had to try it. It was fabulous! Wrapped it up in corn tortillas with salsa. I have not had great luck with tofu. I am not sure really how to cook it yet. This recipe was a real eye opener and a keeper.


I have been searching a lot of vegan blogs too.Lot's of passionate full time vegans out there. A fun one from Jinxi Boo who has an alarming amount of tattoos, one from Bunny Muffin Bakery in Los Angeles called "Could It Be Seitan" and one from Portland that is dedicated strictly to Vegan Reubens. None of them are particularly preachy and all of them are humorous. I made a very fine vegetarian (not vegan) Reuben on Friday and botched a vegan curry tofu recipe on Thursday. It tasted like shoe leather. Saturday we had Pad Kee Mow with tofu from an Asian restaurant here in the neighborhood that I would like to try to duplicate.


So the whole vegan thing is more of a journey for me than a destination. It's been a lot of fun trying new recipes and thinking about the way I eat and how it affects things. And really, who would have thought I would have any discipline?


Tonight, I am making a quickie. Worked today and am painting the house, getting ready to sell.


Slow pan roast a 12 oz package of grape tomatoes, 1 head of thinly sliced garlic, a handful of basil and some black pepper over medium heat in 1/4 cup of extra virgin olive oil in a skillet for about 15 minutes until the tomatoes burst their skins. Meanwhile, cook a pound of spaghetti according to package directions until al dente. Drain spaghetti, reserving 1/2 cup cooking liquid. Toss into the pan with a 5oz package of baby arugula. Toss to coat. 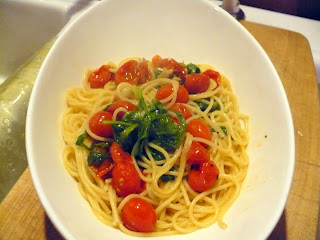 Serve with a sprinkling of Hippie Dust.
Posted by johnfordfw at 5:00 PM