This Spud's For You! 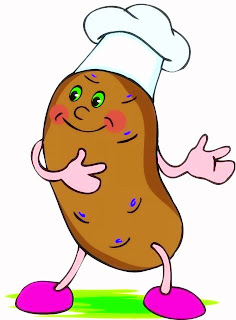 I seldom eat potatoes. I grew up eating them at nearly every meal, but once I was doing my own cooking, I discovered I much preferred rice or grains or pasta. Even so, there come times when I yearn for a giant baked potato, burst open to expose its fluffy, white interior and then stuffed with all manner of tantalizing delicacies. Since the usual trappings of butter and sour cream were out of the picture, I wondered if I could even create something akin to all that non-vegan goodness.

Then came the day I looked into the refrigerator to find a bevy of vegetables that needed to be used. I tossed them on a large sheet pan, drizzled them with olive oil, salt and pepper, and put them in the oven. My plan was to make pasta primivera. But then I had this off the wall idea: why not make potato primivera? Figuring it might be a tasty solution to my stuffed potato quest, I tossed a well-scrubbed Idaho spud into the oven with the veggies. Hey, what could it hurt?


While I was waiting for everything to get done, I made my usual vegan bechamel sauce. Once the vegetables were roasted, I tossed them into the sauce, along with a few dashes of cayenne pepper and a couple drops of hot sauce, and then I poured all that creamy goodness into the potato and atop and then let it run down the sides. I sprinkled it all with fresh chives. Doggone, it sure looked inviting. But would it taste good?  Give it a try and let me know what you think. Far as I was concerned, it was the best stuffed potato I ever ate.