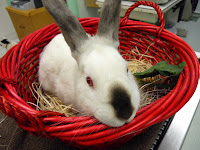 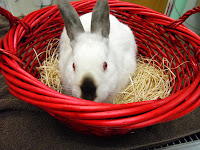 We don't eat many rabbits here in the USA, but in Europe they do. My Dutch sister-in-law even served it up for dinner for us. Knowing that I haven't ever tried it, she thought it would be a nice gesture of hospitality. I was a little grossed out, but I did try it. I thought it tasted sour and gamy.

I felt conflicted at the time, wanting to be a polite guest, grateful to her efforts to please my husband and I. Yet, I have owned pet rabbits, and my dear friend is on the board of BUNS (Bunnies Urgently Needing Shelter) here in Santa Barbara. She refuses to eat at restaurants that serve rabbits. I felt that I betrayed her too. Well, now at least I can say that I tried it once and I don't like it.

This rabbit pictured finally got adopted after a few months in the limbo of lost and found pets with the city of Carpinteria. When he first came to our facility, he was smaller, with dirty, yellowed and matted fur. I gave him a bath, and over time brushed out the ugly dead fur clinging to his hide. He patiently let me do what ever I wanted to him. Just happy to have the attention, any attention! I kind of miss seeing him on the weekends when I check in on the animals, but so relieved that he found a loving home. I bet he's glad we don't eat a lot of rabbits here. 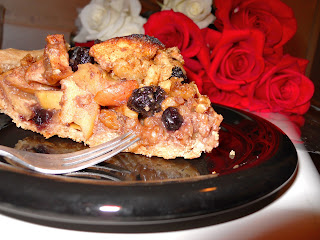 Health Nut Apple Pie
﻿
Okay, this turned out delicious and hearty. Yes there is a little sugar but the whole wheat flour and walnuts kick up the protein, while the dried blueberries take the traditional apple pie into a new flavor direction. You really need to make your pastry, though. Yes it is convenient to buy those frozen pie shells, but homemade tastes so much better! The standard recipe for a one crust or two crust pie shell always leave me with barely enough dough to flute the edges. Here is a doubled recipe I use because I like to have extra dough to freeze or make turn overs with. You can wrap and refridgerate the dough for a couple of weeks too.

1. Sift the flour and put into large mixing bowl. Stir in salt a few quick turns. Cut your cold, straight from the fridge margarine or shortening into smaller pieces and drop into flour. Use a pastry blender or two knifes to cut and mix up smaller and smaller pieces of shortening with the flour. When the mix looks like the two are well distributed together, (take off your rings) and add 4-5 tablespoons of ice cold water. Use your fingers to mix and knead. Exposing the dryer flour underneath and adding more water, 2 tablespoons at a time until the dough balls into one mass. You do not want it sticky! Don't put in too much water!

2. Divide the dough into two balls and flatten one with your hands, before you turn it onto a floured surface. I use a large cutting board, or just the flat counter top itself. Keep flour handy, roll it twice as flat, then gently pick it up, smooth more flour on your surface to keep the pastry from sticking. Turn the dough over and again roll up to twice as big. Repeat until you have a enough to line the bottom layer of the pie dish. You can check by gently folding it into fourths and then transferring to the dish, not big enough? Roll out some more. When you position the dough over the pie dish, gently lift the edges to ease the dough down snug against all sides. Cut off the excess dough.

3. I didn't put a top layer on my pie, but it probably would have worked better with one. Some of the apple slices got pretty brown-black. Either roll out the next ball to lay on top after you fill the pie, or save the second ball and simply finish the edges by rolling and pinching, or rolling under and pressing with a fork. Don't over fuss. It's supposed to look homemade!

4. Mix sugar, flour, spices, and salt in a large bowl. Stir in apples, walnuts and blueberries. Fill pie, and dot with margarine before covering with top shell (optional). You need to cut strips of aluminum foil to cover the edges of your pie before baking. If you don't, your pie will have very brown or black edges.

5. Bake in a 425 degree F. oven for 40-50 minutes. Poke a few holes into the pie if you have a top crust using a fork or knife to let steam out. You will smell it and want to eat it when it turns lovely brown. 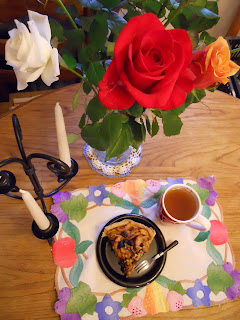