The Artist, Little 4 Legs and I were making our way down the road at dawn. We weren’t breaking any records. With few words and many yawns we ambled, we stopped to let Little 4 Legs mark her territory, we strolled, but we didn’t turn back. I had a pint of chocolate coconut milk frozen dessert, 600 extra calories to walk off. It crossed my mind that I could do that later in the day, but we persevered and 45 minutes later we’d done our lap. High five.

Walnuts and Raisins and Rice, oh My
Repetition leads to boredom, so I am changing out the Buckwheat cereal for Cream of Rice cereal this week. It’s for babies, it says on the box. I check the nutritional information and decide that it is good for me too. After buckwheat, the rice looked impotent there in the measuring cup. I decided I had to do something bold. So, I poured 1 cup of rice milk into the pan and heated it to boiling, then I added a dash of salt, a couple of shakes of cinnamon, a ¼ cup of organic raisins and the ¼ cup cream of rice cereal, stirred, turned down the heat and cooked it awhile, stirring often. It clumps if you don’t stir, some sort of early morning protest I suspect. I’m not discouraged. When it looks the right consistency, I poured it into my bowl and added ¼ cup of chopped walnuts and a little brown sugar. Delicious? Not really.
There are nine servings per box. This is the recession and it would be down right wrong to empty the box on the bird feeder. I will have to find someone to help me get through the next 8 servings. And I will have to get bolder. Since the rice is virtually flavorless, my imagination is my only limitation.
The delicious, juicy, pretty honey dew melon did make me smile.
And water. Necessary after the walk and the lingering sugar load.

PS – Buckwheat Cereal carried me longer than Cream of Rice, so I was scrounging for a snack in 2 hours. Note to self. Plan bigger breakfast when serving Cream of Rice.

Hummus
I was adding McCormick’s ground cumin to my beans last week when I noticed this hummus recipe on the cumin can. I tried it out on Monday.

If you buy them, they will fill.
Someone in this house decided that we needed more plastic refrigerator storage containers and in no time they are all full of leftovers in the refrigerator. It isn’t just hard to find a cover to fit a container, it’s hard to find an empty container.

Blending Cultures
It’s Wednesday and I’m looking for a vegan snack. Fate intervened. There they were, a little hummus and a little pico de gallo (literally rooster’s beak – how it became the name for fresh tomato salsa is probably a great story), sitting side by side on the refrigerator shelf, asking to become one. The Middle East married South America. The red pepper and cumin in the hummus were already making their way South, the fresh salsa on top just took it all the way. Blue Organic corn chips dipped in the Fiesta Hummus made a nice snack. EieieLalalaEieieya. Viva La Fiesta. 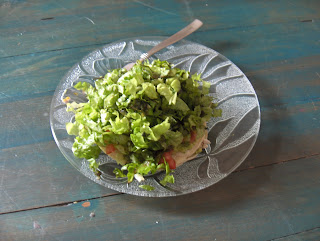 In a non stick fry pan I heated 2 corn tortillas, one at a time, to crisp them up. On the first one I spread warm refried beans, then some chopped tomatoes, then the second tortilla, spread with mashed avocado, a little chopped onion and cilantro and red leaf lettuce.
A great pseudo tostada. Or maybe it does qualify as a tostada.
I drank a couple of big glasses of water. (A pint? Did I have to eat the whole pint? I guess I did.)

Go Greek
I found 'The Greek Vegetarian' cookbook at the library, written by Diane Kochilas and decided to try the Lentil Soup with Chard or Spinach (Fakes me Seskoula y Spanaki). How could I not like it? I didn’t like it. Onion, garlic, olive oil, tomato, lentils, spinach, water, vinegar. Doesn’t it sound good? I didn’t even like how it smelled while it was cooking. I tried to like it. Ate 2 spoonfuls and dumped the rest. I settled for a green salad with a popcorn chaser for dinner. It took me back to those dorm days. Thank goodness I hadn’t decided to invite the gang over for dinner and thank goodness the rest of the family had other plans for dinner. It was a bachelorette dinner. It happens.
Posted by Sonsie A David at 10:48 PM

Email ThisBlogThis!Share to TwitterShare to FacebookShare to Pinterest
Labels: Hummus