Torn between calling this week's column welcome to the public library or they don't call it a laptop for nuthin' has brought me to a decision to informally name it Green Pepper. Then again the aforementioned color withdrawn, I'll say Peppers. At the public library, one expects a level of quality below that of a university library; but what should one expect at a community college library? Who knew- after getting over the sticky desks tops, contained at least in a somewhat private cubicle, there are plenty of electrical receptacles. Matter of fact, each desk has a minimum of four, that's right, quattro, and the one I'm at has a total of seven, that I can see, along with 2 “207-ED E-1” vacant data ports, from that span of about 6 months in the 90's when people thought they needed a hard connection to a data link, regardless of the fact that no one owned lap-tops in those days due to the shear cost and cumbersomeness of those beasts. And to the lap top comment, I found it very difficult to type at desk level, what is that 29-32 inches or so, so here I am, slouched back from my private vestibule typing like a coffee shop hound with the machine on my lap. However, lattes are not allowed past the security check.

I hate to think this but from the disclaimer on the wi-fi, pretty much the administrators here can see and hear and store just about anything one does- so I dread my giggle account being compromised, however using an https: link is supposed to be safe.

Enough of that, on to the peppers. A brief trip to the countryside of PA turned up a bounty of huge green and half-red peppers. After spending a winter cursing canadian peppers at 4.95 a pop (and consequently either not eating them or diligently awaiting the farmer's market to open) it is a sight for hungry eyes to score a lode of green pep. “Want a pep?” Sure! I'll take a pep. “How 'bout two?” yes, definitely could use dos. “Tres?” Let me get my bag! Next thing you know, there is a drawer full, a crisper full that it, of these huge green peppers. Each morning, I open the crisper to behold thy lode once again- a boon to the vegan. But, alas, time-decay is ever-present on and thus one must decide when to close his position and reap the benefits. Wait, be conservative- parcel out one each day- will be able to have peppers for a week. But with the weekend, I won't have time Wednesday, da-da...so, for vegan night it is... 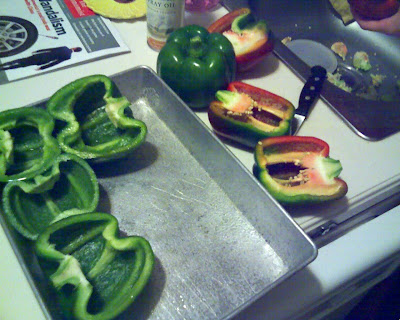 5 local, grown in this country, medium-large green peppers, that you didn't shell out 5 clams each for!
3 cups Cooked quinoa (flavored with a bit of vegan vegetable broth)
1 “slab” of wild rice tempeh; slice into strips like "pulled"
1 large tomato (or 3 large and ixnay the canned) diced
1 can diced tomatoes
¼ cup chopped fresh parsley; and you know this is too easy to grow that you paid 5 bucks at the grocer's for it!
1 tablespoon of minced dill
½ onion chopped

Now, wash the local soil off the peppers and slice lengthwise such that one ends up with two roughly even halves, and remove the seeds and excess flesh. Preheat oven to 395degF. Grease up two metal baking pans or corning ware or what-have-you and place the halved peppers in each, open side up of course.
Meanwhile, sautee the chopped onions along with the dill; after about three minutes, add the quinoa and the tomatoes. In another sautee pan, sear the tempeh that you “pulled” 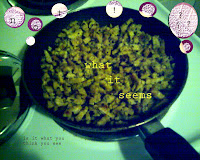 until lightly browned. Add this to the quinoa setup. Keep at about medium heat and continue to stir until all is heated evenly throughout; now add the parsley, stir one time, 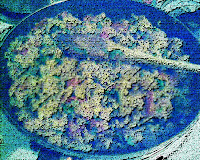 and spoon the mixture amongst the pepper halves. Add a little apple cider vinegar to the pans, and a bit of water so there will be steam created once baking. Cover the pans with foil or if you are using nice stuff cover with your glass lids. 'Thow 'em in the oven, and let 'er rip for a good 30-35 minutes, depending on how “done” you are wanting the peppers.
While that is baking, make a basic roux (vegan so it becomes faux) and add the garlic and grated soy cheese; this will serve as the sauce topping.

What can one serve along with this pepper feast? Well, I ate two, and had room for no more. And that is why I also ate boiled corn on the cob with chili-paste “butter.” However, the peppers make a fairly self-contained meal, and make lovely leftovers as well.
Posted by Ben at 6:32 PM