The Argument
The brain is in charge. We like to think that we are in charge but the truth is that the gray matter between our ears is calling the shots. How we fuel the brain, is in our control. And that makes a difference in how well the brain works. Facts. Just the facts.
I make this argument in self defense. There is a lot of eye rolling and tsking and sighing by others when I say I have food allergies. You might have food allergies too and just aren't aware. I'm making the case here, that if you are feeling under the weather most of the time, it might be in your best interest to consider the idea that the fuel you are choosing is not right for the body Mother Nature gave you.
(I've been watching a lot of "Bones" reruns on TNT and it has reminded me of the facts. Is Booth in love with Brennen or is it the swelling on his brain from his recent surgery that is causing these emotions? Fiction can teach us a lot.)

Week days I'm not in the mood for elaborate morning preparations. Blenders are made for weekday mornings. No recipe required. Just think about it. What tastes good together? Almonds, strawberries, banana and peanut butter. It's a shake. 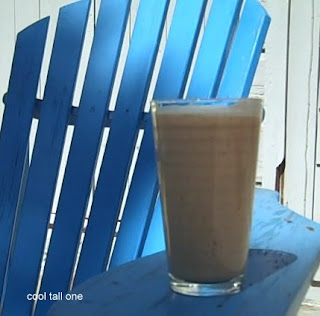 It's my first time trying almond milk. It's good, but is it good for me? I took a stroll around the Internet and the jury is out. There are recipes for making your own and it's probably better to do that. In this recipe I could have thrown in a handful of almonds and a cup of water and had a more nutritious drink.

They were a Christmas Gift in '69, Volume One and Volume Two of Julia Child's Mastering the Art of French Cooking. I read them like a novel. Just looking at the cookbooks, I can feel butter dripping down my chin. A child of the Mid-North were Butter reigns, I know that feeling well. Corn on the cob was buttered by rolling the cob over a quarter pound of butter. Hamburger buns were buttered, mashed potatoes were buttered twice, once in the mashing and again on the plate. Butter in baking, butter in frying, butter, butter, butter.

Butter doesn't like me anymore, and today on vegan day, well, it goes without saying that butter isn't in my thoughts. The question is, can I find a Julia recipe fit for Vegan day?

When the opening day of Julie and Julia the movie was announced, LA bought us tickets. We were some of the first to see it. It was a warm LA afternoon and we entered the theater early. It was packed with cooks, anxious to see Meryl Streep and Amy Adams as Julia and Julie respectively. I had had my name on the list at the library for the book for weeks, hoping to read it before I saw the movie. But in this case, that was not to be. (Before it was a movie it was first a blog, then a book, then a movie.) I'm blabbering. What I want to say is that it is finally my turn to have the book. I've read 3 chapters and I am encouraged to find a recipe for today's menu. It is a challenge, mostly because if you like cookbooks it's hard to stay on track and mostly because it's not very vegan. (Like me. Not very vegan. Just one day a week.) And Julia wasn't suffering any food allergies I'm sure.

Today I am serving Potage Parmentier. A fancy way of saying Leek and Potato Soup. I will leave the skins on my potatoes, that's the kind of gal I am, and I will not add the cream and butter, but for my house mates, there will be a full creamer and a butter dish sitting ready if they chose to add their own. It's such a simple recipe.

3 cups leeks, 3 cups potato sliced thin and 2 quarts water, 1 Tbls salt. Simmer 40-50 minutes until veggies are tender, mash veggies against the side of the pot with a fork or send them through a potato ricer and you're done. Garnish with parsley, or make a nice herb mixture of your choice. For 40 minutes the pot will be calling all to the table. The fragrance of leeks and potatoes cooking on the stove will be a memory stored in the brain forever.

I served it with a green salad. That's it. Middle of the week dinner to satisfy the tummy and fuel the brain. Bon Appetit.