A note on bread: for some, gluten is the issue so it must be especially found at the grocer's or it must be made from scratch at home. For others, bread, gluten notwithstanding, seems quite okay to consume; Now from a vegan's standpoint, beware, yes one more thing to worry about, that many breads contain some form of dairy, and some may contain eggs. Reading the label can lead one to make a wise choice, the one without whey, milk solids, or yolks, (or HFCS,) being the better. Because this might not be such a popular choice, I've been able to find such loaves on two-for-one clearance at the end of the week; then we all know the drill- freeze one, use one.

With that out of the way I'm not going to mention bread again throughout this article. I will, however, mention lunch: 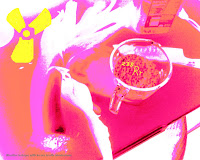 (Ukraine variation shown w/mutated scallion)
1 cup Risotto rice
1/2 Large onion or 1 LARGE MUTANT SCALLION
2 tblspn safflower oil
1 tblspn earth balance (margarine)
3 cups water (preferably not deuterium)
3 tspn vegan bouillon powder
pinch of rosemary
crushed red pepper to taste
S&P to taste
This is way too simple. I struggle with rice every time I attempt to make it; then I usually ruin it, burning the bottom and leaving a soupy mess on top that has taken a total of three hours to prepare, and how appetizing to serve your side of rice with dessert. So this time I used a recipe, and I used Risotto rice instead of the typical brown long-grain I've been burning and dousing. 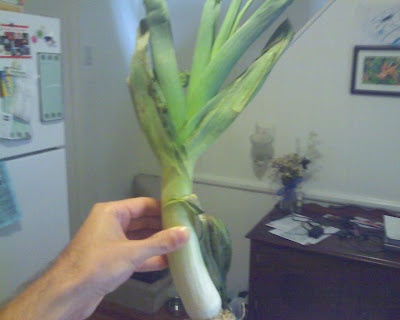 in the fridge; it had started to wilt in the outer leaves so I thought it time to put into service.

So I sliced up the “scallion” 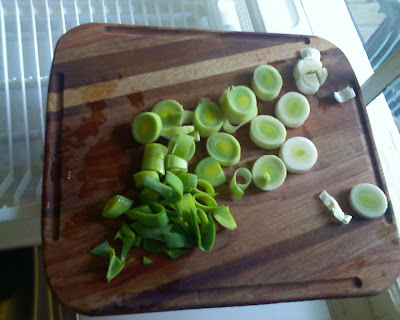 and sauteed it in about 2 tblspn oil, plus 1 tblspn of Earth balance or any other vegan margarine on just over medium heat. I did this for 3 minutes, constantly stirring. Then I added 1 cup of Risotto rice, and stirred for another 2 minutes. At that time I added a pinch or Rosemary, and pinched hard to crumble. Next, I slowly poured in 1 cup of vegan broth while stirring, attempting to allow the heat to catch up, and then I covered the pot and waited maybe 5 minutes, at which point I added another cup of the vegetarian broth- I used an instant powder and just rapidly stirred 1 teaspoon into the cup of water- at a rate of ¼ cup at a time, letting the heat catch up and the rice absorb. I covered for a few more minutes so the rice could expand, and added the final cup of broth and lowered the heat to low once it began bubbling around the sides- stirring constantly so as not to burn the bottom. About 5 or 10 minutes later, the Risotto had fully expanded and I was in business. 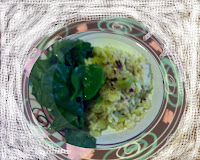 At plating I simply added a handful of rinsed spinach leaves, added a bit of salt, cracked pepper, and crushed red pepper. I found it had a very heavy onion flavor, and sliced tomatoes would be a great compliment.

I would also recommend a side of fried tempeh or tofu, as this is a bit of a carb-bomb; I was dozing by 3:00pm! So try some dairy free & gluten free chocolate chips along with black leftover coffee and a few almonds for good measure to get through the rest of your afternoon. Enjoy.
Posted by Ben at 8:06 PM