It's here, in the house, sniffles and cough and aches. Out with the juicer and the 8# bag of oranges from the Farmers Market. Nothing like it. Fresh squeezed orange juice all around. For $5.00 you can get 8# of Valencia oranges, easily enough for 3 qts of juice. Now, there's a bargain. Sweet, refreshing vitamin C.

Today I super glued a finger of my left hand and a finger of my right hand to a toy I was repairing. Awkward. I had to soak my fingers and the toy in fingernail polish remover for about 20 minutes before I could get free. You don't want to know what I was thinking. Stuck was an understatement.

Today One-Three told me that she learned on a TV program that geckos were veterinarians. What's a veterinarian? I asked her, fully expecting her to tell me that they eat vegetables. But no, she said that they take care of sick animals. I wonder if she has the image of the Geico Gecko in her head, taking care of animals. I did tell her about vegetarians and now she's clear.

Today I made some Vegetable Broth. It's in vegan recipes all the time, right where I would normally use chicken stock. I'm sure vegetable broth is rich in vitamins and minerals. But I wonder. If you make vegetable stock, and throw out all the veggies, does that mean that when we boil potatoes, the nutrition is mostly in the water? What good vitamins and minerals did I throw out today? What would Alton Brown say about that?

Throw it all in a big pot, bring to a boil, turn it down to a simmer and let it go for 2 hours. Strain and throw the vegetables away. I know. What a waste. There you have it. Vegetable stock.

I had sick-one and sick-two try it. It got two thumbs down. "What did it taste like?" I asked sick-two, thinking maybe she didn't really try it. "Onions" she said. It does taste like onions. And why wouldn't it? Onions, garlic, and leeks. I don't think Vegetable Stock is ever supposed to be the main event, it's the base. Is it also a waste?

I packaged most of it in plastic bags in 2 cup portions and froze it. Two cups I left in the refrigerator to use as a base for a sauce later this week.

By now you know that I'm a big fan of the online NY Times. In the fitness and nutrition section I found a recipe for Pasta with Shell Beans and Tomatoes. It looked straight forward and allergy free if I used Brown Rice pasta. What I didn't expect is that it would be such a pleasure to prepare. It was the sauce that was all the fun.

Here it is - from Martha Rose Shulman's column, with my notes.

1 to 1 1/4 pound shell beans (about 1 3/4 cups) I used 2 cans of cannelini beans.
1 small onion halved
7 cups water
2 garlic cloves crushed
a bouquet garni made with a few sprigs each of parsley, thyme, sage and a bay leaf.
That bouquet garni got me all giddy because I have all of those in my garden. Yes, even the bay leaf.

Because I used canned beans I modified this part - I wanted to infuse the beans with the other flavors, so I chopped up the onion and sauted it with the garlic, then I added the beans, a cup of water and the bouquet garni and let it slowly simmer - I turned off the heat and let them get acquainted until it was time to add them to the noodles - only then did I take out the bouquet and throw it out.

OK - this sauce is the bomb - the Italian spirit was standing at my side - this is her sauce, a simple tomato sauce.

Heat olive oil in a large heavy skillet over medium heat, add the minced garlic. Cook, stirring until fragrant, about 30 seconds, add the tomatoes, sugar and the basil sprig. Salt to taste. Cook, stiring often until the tomatoes have cooked down to a thick sauce and smell fragrant, about 15-20 minutes. Taste and adjust the salt. Stir in 1/2 cup of the bean broth and mix together. Stir in the beans. Keep warm while you cook the pasta. 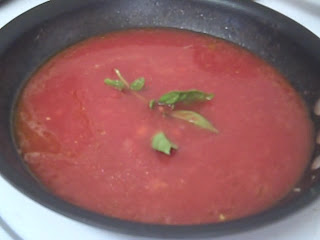 Bring water back to a boil, salt generously and add the pasta. Cook al dente, following the instructions on the package. Drain and toss with the beans, tomatoes and slivered basil. I can smell the basil. I like this dish, but mostly I loved making the sauce, adding the slivered basil at the end. This tomato sauce will go with me to other pasta dishes.