Have you heard of the Little Free Libraries? A project to promote literacy and community started a few years back by two advocates of reading in Wisconsin, Little Free Libraries are being built all over the nation. Volunteers and property owners from Maine to California, and Wisconsin to Florida are building their own little book exchanges and placing them on their properties. Unique, fanciful and fun little boxes are popping up all over the country and book exchanges are ensuing. 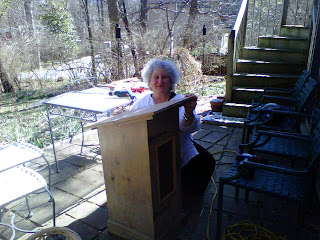 I decided to build and host a library in my little hamlet in the Ozarks after a dear friend of mine built one in Fayetteville. She is one of those people who has seemingly boundless energy and enthusiasm.Once she built one and placed it  in front of her home, neighbors began following suit and there are now four or five within walking distance of her house. She has all the cool power tools and mechanical and mathematical abilities and offered to help me.I can't ever seem to find my tools and posses no such abilities, so her help was very much appreciated.

My goal was to build a library that offered primarily cookbooks centered in an herb garden where people could help themselves to both. I have an extensive collection of cookbooks and it was time to cull them. I  really did not think the library would be a hit out here in the boondocks. It would be a fun project and if nothing else, we could just chalk it up as another one of my eccentricities. One of the locals stopped by when I was placing the library and informed me that "half the town thinks you're strange". I told him that "that is only because the other half doesn't know me".

Surprisingly, my little free library has been popular from the start. People driving by or out on a walk, stop by to check out what's new and gather around for a visit. And while the books on chocolate and cheesecake are more popular than the ones on tofu and tempeh, I'd like to think that some conversations on healthful eating have begun. One of my more colorful neighbors is on a weight loss program and she stops by almost daily to  nab books with an emphasis on vegetarian and vegan cooking. She is exposed to new ways of cooking , I get to play with her dog. And, the herbs are flourishing! In another week I'll place scissors and zip lock bags in the library and folks can help themselves to oregano, basil, dill, sage, thyme and chamomile. How fun is that! 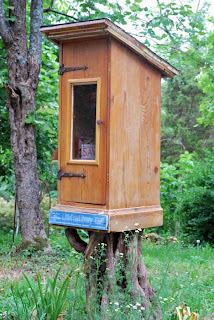 Has your local library closed? Do you live in a rural area where the nearest public library is a long drive away? Or maybe you are just coveting a copy of your neighbor’s first edition? Then maybe Little Free Libraries are for you! To find out where there is a Little Free Library close to you check out their website at www.littlefreelibrary.org where you will find a nationwide listing of libraries along with photos and a map with GPS settings of libraries close to you. Have some fun. Eat well. Build community!
Posted by johnfordfw at 7:01 AM