This is a very easy dish that just so happens to have a tasty snack as a by-product. This time of year I have seen huge spaghetti squash available; so I decided to employ those calories into dinner. As an experiment, quinoa sprouts turned out well; and even better was the recipe I came up with on a whim. Broccoli and tempeh happened to show up at the party. So, digg: 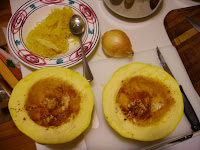 Preheat oven to about 375degF. Cut the squash in half and remove the “guts,” yet save the seeds. The seeds will actually come out first and easier than the bitter guts. Reserve seeds for later. Add about 1 tablespoon of canola oil into each half. Sprinkle with salt, pepper, about ½ teaspoon raw sugar, ¼ tspn cinnamon, cloves, and ginger, each, then cover exposed flesh with aluminum foil. Place in oven and allow to bake for about an hour. 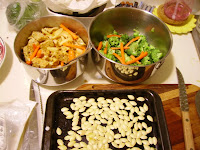 Chop the onion into fairly small pieces; cut tempeh into bite-size pieces, and marinade in a bowl with the thai sauce, hot sauce, 1 tablespoon oil, and aminos.

In the meantime, get a small pan med-hi hot and add 3 tablespoons oil. Take the quinoa sprouts, that you harvested after three days of rinsing three times a day and leaving in an inverted gauze-covered mason jar near sunlight that you started from simple bulk “quinoa,” [about ¼ cup bulk seeds] and shake with 2 tablespoons brown rice flour, a bit of salt and pepper, plus a bit of onion powder. If needed, add more rice flour to bashfully coat the sprouts. They should clump into perfect fry-size pieces. Pan-fry until brown, then flip once and brown the other side. Remove unto a blanket of paper towels or cut up brown paper bag, and immediately season. Serve with vinegar, lemon juice, and cilantro. 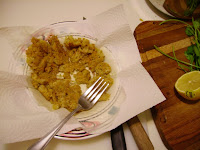 Now it is time to stir-fry the onions in a larger pan with 2 tablespoons canola oil on med-hi heat. Once the onions & tempeh begin to brown slightly, on each side as you've turned them of course, add the carrots; shortly thereafter add the broccoli, by cutting the crowns with a sharp knife directly into the pan in pieces the size you'd like to eat. The stalks may need to be peeled and chopped fine in order to retain flavor before adding to the stir. Once broccoli changes color to that of one's desire, it is time to serve up along with the spaghetti squash. 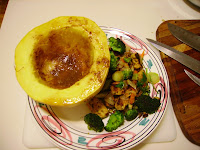 Simultaneously, one may choose to place the reserved seeds in a small flat metal pan with some oil to bake in the oven, not before adding a bit of agave syrup and salt. As soon as the seeds begin to change color, turn them; and remove once both sides have slightly browned. Serve as an appertif or save for a late night snack.
Posted by Ben at 4:41 PM