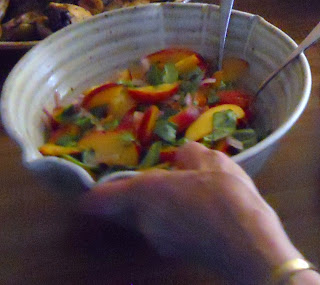 Food is such an important part of American gatherings. This simple peach salad titillated our taste buds at a family reunion last month. My Aunt Barbara tore the recipe from a Martha Stewart magazine. Thinly slice peaches, and sweet onions. Chop a large handful of basil. Combine all, then squeeze the juice of a lemon over it, drizzle olive oil over it, salt and pepper to taste.

Some families spread out over United States, and rarely come together. When this happens, as with my mom's. It gets tricky planning and coordinating a get together. At first, her cousin offered their house to all her nearby siblings. Then it snow balled into almost everyone, except for brother Don. When he was called two weeks prior, brother Larry was told of his passing only two hours ago that very day!

Now this reunion carried the import of a memorial. Soon we descended upon the 85 year old cousin and his wife. At least six of us got nearby hotel rooms. Still, four overnight guests, plus eleven more showing up for lunch and dinner is much. God Bless you Herb and Jan. You handled all of us with grace and generosity!

I made another version of it a week later that was gobbled down at a friend's dinner party. It was deeeelish!

Then over the 4th of July, I made still another fruit salad, also just as good. I had a grocery bag of stone from the farmer's market. I just needed to get some basil and make another vinaigrette after slicing all the plums, peaches and apricots. Wow. There are endless variations. You will be amazed at how well basil goes with fruit!
Posted by Mb.Ray at 8:14 PM