Okra--Outcast Of The Veggie World 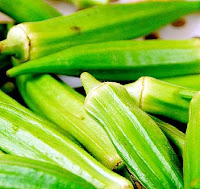 Say the word "okra" in any group setting and chances are, the majority of the people will either turn up their noses while uttering a yukky sound or outright comment that the vegetable in question isn't worth consideration. Unless those people are from the South. They've eaten it all their lives and they like it. Most of us can't figure out why.

As for me, I've never been able to get past the slime. I've tried okra on occasion, but the feel of that gelatinous liquid going down my throat always made me want to gag. So when my friend Ann asked me if I'd like some jars of her pickled okra, I politely thanked her and said no. She wouldn't let it go at that. "Why don't you like okra?" she asked. So I had to tell her. After all, she was a near and dear pal of mine. She had a huge garden and grew all her own vegetables. She had so much okra she'd taken to putting it up in jars.

"Okra pickles aren't slimy," she informed me. I think you'd like them. She sent me off with three jars and dared me to give them a try. I was lucky to get any of those incredibly crunchy pickles because once the rest of the family discovered them, they disappeared nearly overnight. All three jars.

And guess what? Not one bit of slime anywhere. In fact, the pickles were so addicting, I contacted her for the recipe so I could pass it onto you. If you have never liked this outcast vegetable, these pickles will change your mind, just as it did mine. If you are an okra lover, you'll enjoy this simple vegetable as the delicious commodity it can be.

What my friend knew and I didn't is that it is the cutting that releases the slime. Fried whole, roasted whole, or pickled whole and there is no yukkiness involved. If you're one of those okra haters, as I was, give this easy recipe a try. My guess is you'll come to love okra as much as I do--especially pickled. 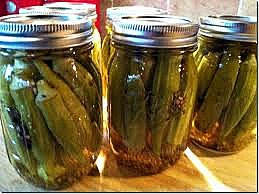 What you will need:

2 pint-size canning jars that have been sterilized in boiling water and are still hot to the touch.
1 pound of fresh, firm okra with pods no longer than 3 inches
Dill seed
Apple cider vinegar
Water
Salt, either pickling or non-iodized

(If you choose to use larger jars, remember to increase the pickling liquid accordingly.)

Wash the okra and cut the small stems off the top. Do not cut into the okra or you'll release the slime factor.

Place the pods in the jars, crowding them a bit. This is easier if some of the pods go in upside down.

In a saucepan, bring to a hard boil:

Pour the boiling liquid over the okra, covering the pods but leaving 1/4" headroom in the jar itself.

With a clean, damp towel, wipe the rim of each jar, making sure it is clean and dry. Place the lids on the jars and seal tightly with the rings.

Allow the jars to sit out overnight to completely cool. Test the lid to make sure the jar has sealed. Push in the center of the lid, if there is no give, the lid has sealed and you can move the pickles into a cupboard.

Canning jars, lids, and rings must be sterile. If you aren't sure how to sterilize them, see the instructions on my previous blog, You Can Can Summer's Bounty.

My friend Ann told me she made only a few jars at a time, as the okra ripened in her garden. If you want to make a larger batch, double or triple the recipe.

Personally, I thought the pickles were fantastic as they were. But don't be afraid to experiment if you'd like them spicier.