You Can Can Summer's Bounty

My mom wasn't a history buff. In fact I doubt she even knew it was Napoleon Bonaparte in the late 18th century who offered a cash prize to anyone who could figure out a way to preserve food so the Emperor could keep his armies fed.
Money talks. Anyway, this guy named Nicholas Appert started experimenting and finally figured it out. Thus began the history of canning foods at their peak of freshness. The bummer is that my great grandma taught my grandma and she taught my mom and my mom taught me and I taught my kids and...well, you know how it goes. Knowledge just keeps getting passed down, whether you wish it or not.

Mom started with the apples. We made apple jelly, applesauce and pickled crab apples--which I liked a lot. Then came the tomatoes. We canned tomato juice, stewed tomatoes, and piccalilli--made with green tomatoes but hey, winter was coming and she had to do something with the fruit that wasn't ripe yet.

After that came the green beans, the corn, the watermelon pickles, the dill pickles, the sweet relish and the carrots. If there was a way to stick something in a glass jar, my mom knew how to do it. Trouble was, it was such a big job that my middle sister and I were drafted into helping. It wasn't a job we enjoyed.

Ah, but come winter mom would send one of us into the cellar's deep, dark reaches where shelf after shelf was lined with jars that gleamed confetti colors of red, orange, pink, yellow, green, and cream.

The snow outside might be 5 feet deep and the temperature may be well below zero, but meal after meal, we savored the Midwest's summer bounty. Although putting up the jars hadn't been much fun, eating the results was definitely worthwhile. So I passed on what I knew. My kids and I made apple jelly, plum jam, dill pickles, piccalilli, and stewed tomatoes.

"Good, huh?" I asked. "Real good," said my son--who liked to cook anyway. "Too much work," said my daughter--who hated the whole culinary scene. Today, one child puts up garlic dill pickles that are the best I've ever eaten. The other goes to the grocery store. 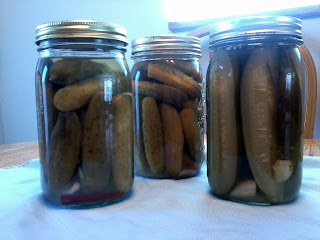 This recipe is so simple, you may be tempted to think the pickles will be soft, mushy, and tasteless. Wrong. While it took mom days and days to make her dill pickles--what with all the brining in the stone crock, etc, these are jarred and ready for winter feasting in but a few hours. Over time, my son has made a few changes as to what goes in the jar along with the cucumbers, but what I give you here is the original recipe.
You can can summer's bounty. Begin with making these dill pickles. Your success with them will prod you on to putting up more and more of the fruit and vegetables from your garden or the local farmer's market. The plus side is everything that goes inside the jar is healthy, vegan, and pronounceable. Let me know how you fare.

What you will need:
About 7 pounds of pickling cucumbers, firm to the touch
7-8 wide mouth quart jars with lids and rings
A large bunch of dill weed or a jar of dill seed

Upon bringing the cucumbers home, give each a wash and then allow them to sit in an ice-water bath overnight. You can make the pickles the very next day. My son uses a cooler to ice his cucumbers down.

Wash the canning jars, either by hand or dishwasher. Jars must be sterilized and warm to the touch when the cucumbers are inserted. Sterilize in the dishwasher or in a large pan with 3-4 inches of water in it. Set the jars upside down in the pan. Leave the heat on medium. When the water has gone up into the jars, turn off the heat. The jars are now sterile. Leave in the pan until use.

Into each jar put:

1 smashed clove of garlic, or more if you like real garlicky pickles
1 sprig of fresh dill, stems and all or 1/2 tsp. dill seed from a jar
1 dried red pepper, broken in half (only if you are a diehard spice fan)
Pickling cukes, whole, spears, or sliced. Stuff the jars with as many cucumbers as possible.

Meanwhile, in a large, deep pan bring to a hard boil:

Pour the brine over the jarred cucumbers, making sure to cover the cukes by at least 1/4"-1/2".

Wipe the jar rims till they are completely dry. Place the lid on the jar and screw on the ring so it is just tight but  not super tight. Leave the jars sitting out overnight. Lids will seal as jars cool. Listen for the pop. Test each jar by pressing on the center of the lid. If the jar has sealed, it will not give; if unsealed, there will be give in the lid. Any jars that have not sealed should be placed in the refrigerator and used first.

Tighten the rings on each jar so you know it is air tight. Allow the pickles to set at least 3 weeks.