Flipping through my first issue of OPRA magazine ever sent to my address. I spy a recipe for this chili. Appropriately, this October issue proposes a few pumpkin recipes. Now, would you ever think of putting canned pumpkin into chili? What about Cinnamon? Mmm? Sounds Indian. I don't know about you, but I have trouble following a recipe exactly. I get out my grape seed oil instead of canola because I saw Bal Arneson use this oil on her Spice Goddess show. Then I used white kidney beans and added rinsed black beans for color. I must admit that I was a little sceptical about this actually turning out. 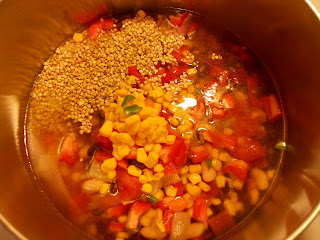 Heat large stock pot, add oil. Once oil is hot, add onions and garlic. Saute about 4 minutes until soft. Add all the other ingredients to the pot. Bring to a boil, then reduce heat to simmer for another 30 minutes until bulgar is soft. Serve hot. Season with salt and pepper. 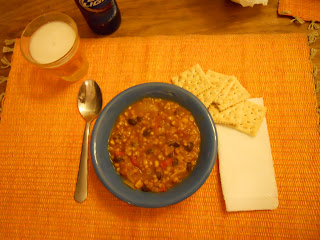 Although I was very happy with the thickness and texture of this chili, the taste for me was lack luster. If you are normally content eating vegan main courses, than perhaps you could appreciate the subtle oatmeal-lish bulgar with the hint of pumpkin flavour under the mild chili and serrano spices.  If I were to make this recipe again, I would leave in the serrano seeds or try jalapeno peppers instead. I'm not convinced cinnamon was necessary, or that the Spice Goddess wouldn't redress the balance of these spices.