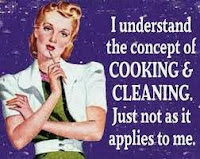 You've heard me say it a dozen times: I hate cooking. I read recently that those who hate to cook are always bad cooks. No one should make blanket statements like that because the blankets are never big enough to cover everyone. Just because I find cooking to be boring, time consuming, and about as much fun as falling down four flights of stairs doesn't mean I can't do it. Truth is, I'm a really good cook. I just don't think it's fun.

With Christmas on the horizon, I've been sitting in my chair knitting up a storm. That's what you  do when you're a senior citizen on social security. Keeping those needles flying leaves me little time to cook--as if I'd spend any time on it anyway. Because it's easy for me to knit and listen to television at the same time, I've got my channel set to the cooking shows. Truth is, I learn something new nearly every day without having to pay too much attention to what's actually going on. At least once a day, I hear one chef or another say that in order for food to taste good, it has to be made with love. I don't think I've ever put love into anything I've ever cooked. In fact I know I haven't. Well, maybe popcorn on the stove. The old time kind with melted butter. But that's another story. 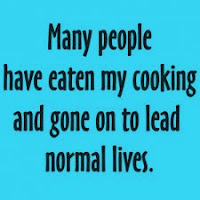 I came across today's recipe in a vegan cookbook. It was called Caldo Verde. As I understand it, that translates into green broth. So I followed the recipe. Personally, I thought it looked boring. I also thought it tasted boring. Now my rule is if I'm gonna spend time cooking, the end result jolly well better taste marvelous. So I went to work on the Caldo Verde and when I finished fixing it, the aroma filled the house with such a tantalizing expectation of something good that the two guests I'd invited for dinner came snooping into the kitchen to see what was cooking.

"It's soup," I told them. "It used to be boring but I fixed it." They know me so they understood what I meant. I took the hot garlic bread from the oven, dished up steaming bowls of my version of Caldo Verde and we all declared it a winner. Now I have a reason for telling you this story. I want you to know that even if you find cooking a necessary drudgery, that doesn't mean you have to be a bad cook. And if anyone suggests that you should put more love into your food, look them in the eye and tell them the only love you feel toward food is the eating part. I can't tell you how many guests I've served in my many years of living who have eaten my food and said to me, "I thought you didn't like to cook. This was delicious."

I don't know who made up the rule that someone has to like doing something in order to do it well. Whoever it was, they lied.


Caldo Verde
Into your soup pot put:
2 Tbs. olive oil
1 large onion, chopped
3 garlic cloves, minced
4 medium potatoes, cut into small bites
1/2 cup celery, sliced small
1 tsp. marjoram
1/2 tsp. red pepper flakes
1/2 tsp. turmeric
1/2 tsp. thyme
1 tsp. salt
1/2 tsp. black pepper or to taste
Cook until the vegetables begin to soften, about 5 minutes
Add:
1 15.5 oz cooked cannellini beans, drained and rinsed (I used canned)
4 cups vegetable stock
4 cups water
1/2 cup dry white wine
Bring the soup to a boil then turn the heat to low, cover the pot and let the soup simmer about an hour, stirring every now and then.
Approximately 15 minutes before serving add:
1/2 cup tempeh that's been cut into small pieces
1 bunch of kale, washed and chopped
Turn the heat to medium and allow the soup to simmer 10-15 minutes. If desired, individual servings can be sprinkled with a bit of nutritional yeast to add a sort of Parmesan cheese taste to the soup.
This recipe serves 4-6, depending on whether it is used as a main course or a side. Any leftovers are even better the next day. 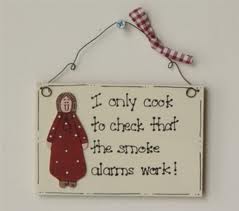