Today has been filled with an innumerable number of phone calls and emails to Realtors, insurance adjusters, plumbers, electricians and roofers. Not a particularly nice way to spend the day. The good news is that if all goes well, we should close on our house in Dallas by the end of the month. The bad news is that we are taking quite a hit. But it is not as bad as sitting on the house and waiting years for the market to recover. I know a lot of people who are doing just that.One must count their blessings and plug onward.

So, I had no idea what to prepare or write about for tonight's blog. Checking on Facebook I came across a post from my mother with a recipe and a challenge to make it and compare results. Sounds good to me. African Peanut Soup. Coincidentally I had the ingredients in the pantry. Except for sour cream which is a Tuesday no no. I do have vegan whipped cream on hand from last week's failed attempt at rice pudding cake but not vegan sour cream. I have tried vegan sour cream and liked it. Could be a bit more sour but good nonetheless.

Here is the result courtesy of allrecipes.com with adaptations by me. It's a short and sweet post as I moved and tossed a couple of thousand pounds of rock today. Had to work off some stress after dealing with the insurance company. Never a pleasant process...

This recipe serves 10 so I halved it all except for the chili powder and garlic. Also, I was almost out of peanut butter so I added both peanut butter and almond butter which I had on hand. Remember, no grocery store here. A bit more subtle than if I had used straight peanut butter but tasty nonetheless. And I cooked it for about 35 minutes after I added the brown rice to get the rice tender. Cilantro would be a nice addition. 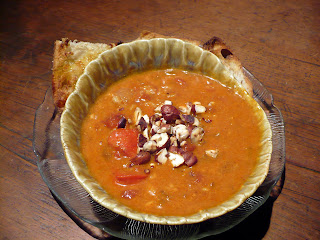 Posted by johnfordfw at 5:28 PM