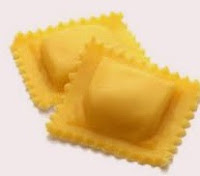 In the vegan world, fungi is more popular than ever. And so easy to attain. No more having to go out into the wilds to hunt for those earthy stems that are safe to eat. No taking the chance that two mushrooms will look exactly alike and I'll bring the poison one home  and inadvertently end my blogging career. These days, everything I need is at my local grocery store. How easy is that?

As it happens, I was having a guest to dinner who is crazy about all fungi, no matter what it's shape. Since I already had a bag of mushroom filled ravioli in the freezer (purchased, not home made. Remember, I hate cooking) I put my mind to conjuring up an earthy cream sauce to pour over the pasta. 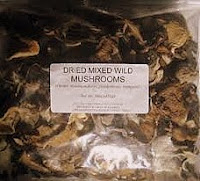 I began with fresh Baby Bella mushrooms and then, to add to the fungi mystique, chopped up a whole bag of rehydrated wild mushrooms and added them to the pot. I seasoned only with salt and pepper, lest I take away from the heady mushroom aroma filling the kitchen.

I made a cream sauce and added it to the mushroom mixture, then dumped the cooked pasta atop everything. I gave it a good stir and let it cook a few more minutes. I served the meal in deep plates so every bit of the sauce would stay where I wanted it. All we needed was some warm French bread to sop up the last bits of that delicious gravy.


1/2 pound of fresh mushrooms, your choice

Bring 1 1/2 cups of water to a boil
Add the dehydrated wild mushrooms
Let them stand at least 30-40 minutes before chopping them into small pieces.

Use a slotted spoon to remove the mushrooms from the water. Pour the liquid through a coffee filter to remove any forest grit and keep the broth for later use. The broth has the taste of wild mushrooms and is just too good to pour down the sink.

Cook the roux until the raw flour taste has gone out of it.
Add 2 cups of non dairy milk and stir the pot until the sauce becomes thick, like gravy. Stir in 4 Tbs. nutritional yeast for a Parmesan flavor and add salt and pepper to taste. Pour the sauce over the mushroom mixture.

Cook the ravioli according to package directions. When it floats to the top of the pot, it's done. Remove the pasta and dump it into the mushroom and sauce mixture. Give everything a good stir and gobble to your heart's content. Try not to groan while you eat.

Serves 2-3, depending on how hungry you are.