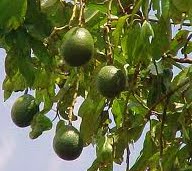 Because I grew up in Minnesota back in the 40s and 50s, the word "avocado" was unknown to me, as was the fruit itself. Then came the day when an aunt and uncle visited us from The Golden State and nestled inside their suitcases were several large green things they called avocados. I was fascinated with the odd looking produce and even more astonished when I was told they grew on trees.

My aunt cut one of the dark green fruits in half to reveal a seed the size of New York--or so I thought. I was used to berry seeds or even citrus seeds, but nothing I knew came even close to the giant residing inside that light green mass.

My aunt removed the seed and scooped out some of the soft innards. Without any adieu, she slipped the spoon into my waiting mouth. To me, child that I was, it felt slimy and nasty and so mushy I quickly swallowed it. When asked if I wanted more, I shook my head no and escaped to another part of the house.

To my mind, an avocado was the armpit of produce world.

When I was sixteen, my family moved to California. And to my dismay, my mom discovered avocados. I remembered not liking them "way back when" and refused to eat them. Even the rest of the family considered them less than a perfect food. Looking back, I know that mom just didn't know what to do with them. Then one day a neighbor showed her how to make guacamole. Mom bought some tortilla chips and put the two products together on the table.

My sisters and I ate up every last scrap.

Thus began my love affair with the avocado and while there are many brands of the green spheres, the only one I really like is the Haas. These days I can slice an avocado onto fresh bread, add salt and pepper and tomato and sliced onions and eat my way through what I consider to be the perfect sandwich. I slice this lovely fruit into salads or serve it inside my vegan tacos or smear the creamy stuff on a flour tortilla and gobble it up without batting an eye. 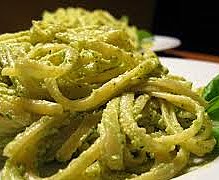 So it was one day when I was looking through a vegan cookbook searching for dinner ideas, that I came across a pasta dish with an avocado sauce. I was intrigued. As usual, I tweaked the recipe to suit my own taste buds and served it to my carnivore company. We all had seconds. I guess that means it turned out pretty good. It looked so pretty, I even took its picture.

Cook the fettuccine in a large pot of salted water, according to the directions on the box. Drain and set aside.

Into a food processor bowl put everything from the avocados to the salt and pepper.

Pulse until the mixture is well blended, but not so much that it is an indistinguishable mess. There should still be some minuscule chunks visible as in the photo above.

I prepared a few ingredients that might be added, should the guest wish to add them to his plate: a small bowl of finely minced sweet onion, minced tomato--flesh part only, vegan Parmesan cheese for those who wished to sprinkle it on top of the pasta dish.

I gave serious thought to using cilantro instead of basil, but came to the conclusion that it may be too spicy to go with the pasta. If I had been making true guacamole, I'd have used cilantro only.

Because the main course was a meal in itself, I served only garlic bread alongside.