In an ongoing quest to convert our favorite comfort foods into something vegan, I've sometimes ended up with a dish that wasn't what I was after though resembled something else just as good, or as a bonus, discovered something new that I hadn't thought of. For this meal, I was after a 1-dish contains all, in an attempt to minimize clean-up. What I ended up with was a new discovery; a “mistake” that turned out to be yet another comfort food that was long forgotten due to its inherent relationship to meat; especially pork for some reason; stove top stuffing. But this rendition was not conjured on the stove; I made it in the oven, so maybe it would be rightly named Oven Style Stuffing. Basically I was attempting to shortcut having to make groats with another pot, so I threw them into the oven pan I was setting up. Well, the groats got overcooked and kind of mushy....but wait, they're just like stuffing! So that means gluten free as well.

Prepare the pan by adding oil, canola is a decent choice, and distribute evenly about the base of the pan along with the chopped onion. Next add the groats; I made the mistake of adding last, and had a heck of a time getting them into the liquid once I realized what I had to do- now use my knowledge to make it easier on yourself! Layer the (mushrooms now if you're using) potatoes, the scallion, the squash, the garlic. Roll the tempeh or tofu in the ginger dressing, and layer those guys near the top of the pan. Add the remainder of the dressing to the dish (just pour it on) as well as the vinegar, lime juice, s&p, and water. 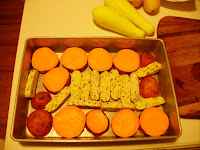 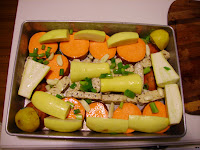 Place in a 375degF oven for about 50 minutes max. Stir things around a bit about halfway through, possibly turning the tempeh; if you used tofu it is not as imperative; drizzle with a little more oil, and add a bit more seasoning. If things seem to be drying out, don't be afraid to add more water at this time. 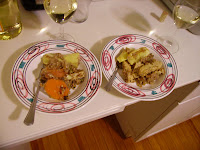 Good luck, this is an adventurous one; looking forward to hear any more innovations! 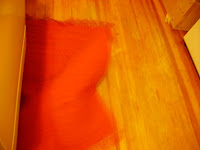