Sleep-In Smoothie (This Happened on a SUNDAY)

Pissed off at myself for sleeping in. It was a lucidly luxurious late slumber, and it totally countered my plans I made last night, which depended on my rising at a decent hour. The kicker was that I didn't really sleep when I went to bed around midnight, as I hadn't had a proper dinner. That was my fault, I suppose I could've boiled some elbow macaroni and made a quick marinara from canned tomatoes and garlic; actually that sounds really effen good; that may be dinner one day this week. Well, instead I woke up at two, and the rest of the night was a can rolling back and forth between awake and semi-awake. Then 5:00am comes, and I barrel towards a thick heavy cloud of sleep. I eat it up, and ignore any instinct or intuitive feeling that the hand was racing past the XII mark. I wake, I sleep, I finally wake and figure it must be some ungodly late morning hour; a civilized hour to awaken; yet I was not civilized, I could barely make rent. I craned my heavy arm over to the phone 10:04am d@mmit. D@mmit. #%&^ing why even #%&^ing get up. I immediately distracted my thoughts with a sequence of events: floss, brush teeth, grab running clothes so as to not disturb the sleeping later, put on coffee – do I make the smoothie I had planned on consuming for energy early morning with enough time that it would digest before my first 10k distance in G*d-knows how long? Yes, #%&^ I'm starving. And a smoothie is going to do nothing to satiate what is a craving for bread. Why do I move so #%&^ing slow in the mornings? I forcibly willed my adrenal gland to emit a droplet of the good stuff; enraged, I peeled the effen banana, threw it in the blender, angrily shook the rice milk with one loud flosh, poured in just enough to reach the top of the blender blades, dumped in protein powder, corrants, gogi berries, almonds, pecans, cinnamon, agave, and 5 ice cubes. I replaced the lid on the blender, winced in expectation of that first ice-cube chop, pressed “stir” and berrrmmmmmmmm the blender made a bound motor hum, and all the lights flashed simultaneously. Was this a sign to not have a smoothie, or am I just that alseep? I pressed “off,” readjusted the glass on the motor base, and lovingly pressed “stir.” Wow, that's looking pretty good; maybe I will have some. But, if I saddle up right now, I could be finished by 11:00 or so and at least get a respectable brunch in.... 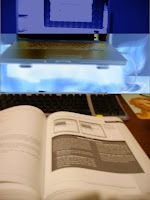 By twelve noon, I was finally trotting down third street, not feeling the rush of motivation I felt last night when I made these plans. That's the truth.
Posted by Ben at 11:17 PM