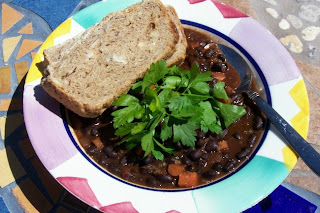 Oh, to be 7 people at once. If I could be 7 people, I could realize the garden I have in my head, read the books on my ever growing list, stay up to date with my blogs, yes plural, move my office to the garage, hike the Appalachian Trail and the Pacific Crest Trail, stick to my exercise program, paint, draw, sculpt, travel, it's a long list, I'll stop. The point is I am never without something to do. And.... and many times I start and can't get to the end (read finish). In my defense, I am an exceptional starter. That's something.

In June of 2009, I read an article on the Freakonomics Blog. (I'll go on record as a fan of the Freakonomics Economists.) It was titled Vegetarianism as a Sometimes Thing. In a nutshell it relates a story about economics PhD student Matt Johnson. Mr. Johnson is an omnivore, sympathetic to the vegetarian cause, with a vegetarian roommate. As time passed, Mr. Johnson started eating less meat. The idea that his body needed animal protein to be healthy was squashed. He studied the environmental, ethical and economic issues surrounding the world's meat consumption. He knew that he was making an itty bitty contribution to righting a wrong. He figured that if more people would commit to eating vegetarian once a week, together something could come of it. Economists believe that the best way to accomplish something is to create an incentive. Mr. Johnson's idea was to create a contract with a group. The group would support each other and each member would feel a sense of accountability to the group.

Matt Johnson and Ian Ayres and Ian's wife Jennifer Brown created StickK.com. They took the commitment - incentive idea forward, allowing individuals to create their own goals: lose weight, clean their bedroom, finish the book they were writing .... The incentive at stickK is money. If you fail to meet your commitment, stickK collects the $ you pledged from the credit card number you give them when you sign up and donate it to a charity of your choice. I signed up. I would eat vegan every Wednesday and blog it. It's now April. I've kept my commitment, not wanting to pay the $ amount I pledged if I failed.

Today I'm wondering if I need to go back to stickK and make more commitments. It works for me. However, I am not 7 people and I must keep that in mind. Maybe I'll add one more

For this Vegan Wednesday I made a black bean soup. You know, a little onion, a little tomato and little carrot. A little garlic, cumin, salt, pepper mixed into the black beans. Garnish generously with cilantro.

My friend inspired the bread I made. She has a loaf of Trader Joe's European Brown Bread. It reminds me of a brown bread my mom would make in a can. The batter went into a can, the can into a pot of water and it all went into the oven to steam. It was a dense, wet, delicious bread. So I took the Gluten Free bread recipe I have and added sesame seeds, slivered almonds, sunflower seeds. I wanted the bread to be heavy and dense. It is. You notice in the picture that there is no spread on the bread. (a rhyme). It's a perfect dunking bread.

Email ThisBlogThis!Share to TwitterShare to FacebookShare to Pinterest
Labels: Soup