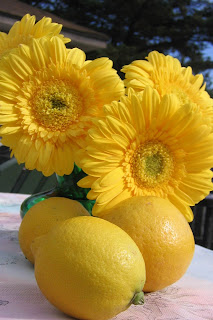 Winter is the flu and cold season. When I was a child in the Mid-North, suffering one of these winter ailments, my mom would serve me hot soup and a plate of lemon peel, the white part only. The lemon peel, she said, was full of vitamin C and would have me back on my feet in no time.
The health benefits of lemons is widely acclaimed. Besides being a health benefit, it's a replacement for salt for those on a low salt diet. It's pretty. It's tasty. It has household and beauty applications.
I have decided to explore the culinary depths of the lemon in my January posts. So here goes. Part 1 of THE LEMON.
It's a no brainer that lemon makes a great salad dressing. I modified a recipe I found so that it would look like a dressing I had at a recent party. It was served in a small bowl with a spoon. It was full of chopped onion. You gave the dressing a little swirl before you served yourself. And it was delicious.
For my salad, to get on with the lemon theme, I added about a Tablespoon of lemon zest to the greens too. Delightful.
The Dressing﻿
2 Tablespoons Lemon Juice
5 Tablespoons Grape seed Oil
1/2 teaspoon finely chopped garlic
2 teaspoons finely chopped onion
1/4 teaspoon salt
1/4 teaspoon pepper
1 teaspoon lemon zest
Simply whip it all together and serve. ﻿ 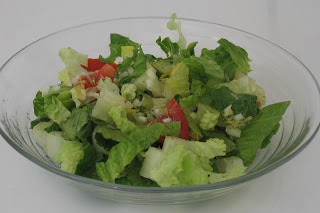 Quinoa, a complete protein, is now available in many forms. I have just discovered quinoa linguine. Last night I cooked the whole package to see how they cooked and to see how they held together and reheated the second day. I love them. It says on the package, "You'll never go back to plain noodles again." I think they're right. I love the flavor and the texture.
For today's main course I pulled together some things from the refrigerator and at John's suggestion, I served nutritional yeast as an option. Nutritional yeast is suppose to be a Vegan's Parmesan cheese. Don't kid yourself. It's not cheese. I'm from the mid-north you know, where cheese is king, and this is nutritional yeast and only nutritional yeast. Let's let nutritional yeast have it's own song. It's good. But it's not cheese.
My stir fry today is this: 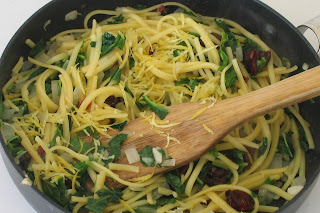 ﻿
Now you have something else to say to that old line, "when you're handed a lemon, make lemonade". Where did lemon get that reputation? Lemons are a staple at my house and if they aren't not already, Lemons may soon be a staple at your house too.
Posted by Debbie at 2:07 PM