Heard the new slogan from the pork producers? "Pork: Be Inspired". Not quite as catchy as "The Other White Meat".

I have to be honest, I miss pork. I miss bacon. But, I like pigs, pretty smart animals. Smarter than your dog. I'm waiting to see a bumper sticker to that effect. I had a pig once for a very brief period of time. My ex bought me one for my birthday. Only problem was that I lived in a tiny one bedroom apartment with two cats. That wasn't the only problem actually. She turned out to be your garden variety farm pig, destined to be a very large farm pig You know, the kind that get to be five or six hundred pounds. And although she loved sitting on the couch with me and watching television, she had housebreaking issues. I told myself that "No, I do not look eccentric at all walking a pig on a leash down the street in Ft. Lauderdale, Florida." Her name was Edna. After some pretty intense soul searching, I decided that she needed to go back to the farm, and the ex with her.

I think I made the right decision for the three of us. After that, I never really felt comfortable eating pork. Did I tell you she was smart? I could tell by the look in her eyes that she was much better than me at Jeopardy. I am hoping that she lived a long life on a nice farm with an owner like Farmer Hogget  from Babe. And up until four years ago, I continued to eat pork but, only sporadically and with guilt in my heart. I never wanted to think that maybe that slice of bacon was from Edna....

One of my favorite pork recipes is for Grillades and Grits. A cajun dish that is usually served at brunch but can also be served at dinner. A spicy dish it is made with strips of pork dry marinated in spices and a red/brown roux made with lard. I'm subbing here with strips of tofu and a roux made with olive oil. A colorful and comforting dish, this one hits the Daily Double! 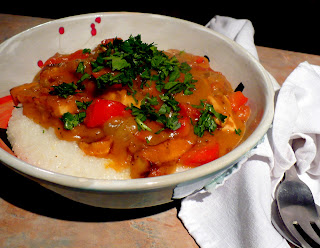 -Mix the spices in a medium bowl and toss the tofu strips to coat. Let sit for an hour or two for the flavors to meld.
-Heat olive oil in a skillet over high heat and saute the tofu until browned on all sides. Remove with a slotted spoon to drain.
-In the same skillet, heat the olive oil and add the flour. Stir constantly so as not to burn and until you get a reddish brown color and a nutty smell. Remove from the heat, add the vegetables. Return to the heat and cook until the vegetables are limp, about five minutes.
-Add the stock gradually, whisking after each addition to avoid getting lumps. Add tomatoes and tofu, lower the heat to low and simmer for about forty minutes.
- In the meantime, cook grits or rice according to package directions.
-Taste and adjust seasonings of the tofu mixture. Ladle over the grits and serve.

Posted by johnfordfw at 7:19 PM