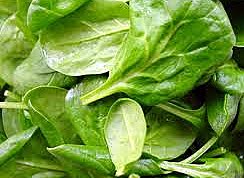 I've always loved spinach but have had an off-putting relationship with mushrooms since I was a kid. To me, they were rubbery and had little to no taste. I pretty much stayed away from them till becoming a vegan. Then I looked them over, saw how many recipes used them and decided to find out how to cook them so that I could eat them without gagging.

Well, I did it. For me, a fresh mushroom is still boring and way too chewy. I just plain don't like the feel of it in my mouth. But cook the fungi in a bit of vegan margarine till it is absolutely soft and glazed a dark brown, mix it with a few onions and a bit of garlic, and I have a starter for something tasty.

This whole recipe evolved from a dish I saw cooked up on television when Ina Garten made mushroom lasagna. Since I'm a lazy cook, I turned it into a simple noodle dish and added in some of my own ingredients-- all while turning it into a vegan meal that was beyond delicious. I served it alongside a dinner salad and some garlic toast. If you're a noodle lover, my guess is you'll like this meal. Let me know what you think. 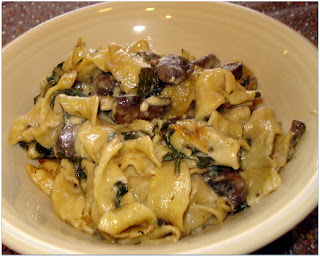 Cook the noodles in a large saucepan:

4 quarts water, salted and brought to a boil
8 oz. noodles (I used No-Yolk)

Cook the noodles until they are al-dente, about 10 minutes.

Drain the noodles and transfer them into the pot with the mushroom ingredients. Pour the white sauce over the top and mix thoroughly. Sprinkle with 1/4 cup nutritional yeast and mix again. The nutritional yeast has a Parmesan flavor that goes well with the dish.

Into a saucepan put:

2 Tbs. vegan margarine or olive oil
2 Tbs. flour
Cook over medium heat until the roux is light tan in color. Do not let it burn or you'll have to start over.

Whisk, stirring constantly over medium heat until the mixture thickens into a white sauce that coats the back of a wooden spoon--about 8-10 minutes. Use as directed above.