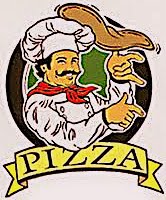 I love pizza. All kinds of pizza. I especially love when it swims in melted cheese and lots of pepperoni. Alas, vegans don't eat that sort of thing. So I wondered if I could come up with a decent alternative. Something that would taste like pizza, have the mouth-feel of melted cheese, and the tangy bite of pepperoni.

I failed time and time again. So I decided to give this illusive entity one last try. Now I'm not going to tell you that it tastes exactly like the real thing. But as a vegan, I was more than happy with the outcome. In fact I'm so happy with it that it will be my Saturday night fare for weeks to come. Hubby and I always indulged ourselves with pepperoni pizza on Saturday nights. And while hubby has gone to live in heaven, I think I'll re-instate my Saturday night fare. Fond memories all around.

Before I give the recipe, let me share some things I've learned. The best vegan cheese I've found that melts like the real thing is Daiya. I used the vegan mozzarella shreds. I put them all over the pizza, just as I would have real mozzarella. When it melted, it was a puddle of white. I used too much. This cheese melts so well, a little goes a long way.

To my palate, the vegan mozzarella doesn't taste like the real thing. It seemed rather like melted provolone in my mouth. No matter. It was quite good and while it didn't string like real mozzarella does, it dripped into a lovely mess on my plate. You'd better know I scraped it all up and stuck it on my leftover crust. Yes, it was that good.

I purchased a vegan pepperoni. While it has the slight smell of pepperoni, it is missing the peppery bite of the real thing. Just so you know, it wasn't awful, but in the future, I'll leave it off and just make a regular pizza margherita--my favorite anyway.

The pizza dough I prefer is one that is thin and crisp. The recipe I'm sharing is like that. If you prefer a crust that is soft and bready, this isn't the crust for you. But I like the crunch of the crust to go with the tomato and cheese softness. They pair well together.

Because the pizza dough needs about an hour to rise, I made it early on. I used my food processor and had the whole thing in a greased bowl and rising before more than ten minutes had passed. If you don't have a food processor but you have a stand mixer with a dough hook, use that. If all else fails, make the dough like your grandma did. By hand. It just requires more time and a lot of kneading to get the dough elastic and pliable.

Into the food processor bowl put:

3/4 cup of warm water, about 110 degrees
1 package rapid rise dry yeast
Let it set a minute or two until you see bubbles forming. That shows the yeast is alive.

Add to the processor bowl:

Turn the processor to dough or mix or whatever your appliance has for mixing and let it rip. I always let the processor do all the kneading for me. If your dough doesn't form into a nice ball inside the bowl, add up to 2 more Tbs. water, a bit at a time, until a nice ball forms. Transfer the dough ball to a greased bowl, cover with saran and set it in a warm place to rise. I leave my bowl on the back of the stove top. It will rise to double in 45 minutes to an hour. When the dough is ready, roll it into a large circle if you have a pizza pan or a long rectangle if you're baking it on a sheet pan.

Brush the crust with olive oil to seal the dough. Skip this step and the the toppings will leave the bottom crust limp and doughy.

Cover the oiled crust with red sauce. I cheated and used a jarred spaghetti sauce. It takes less than a cup of sauce. Add more and your topping will all roll off into your lap when you try to eat a slice of this pie.

Atop the red sauce, add the Daiya cheese. Because it melts so well, use less than you think you'll need. You can always change the ratio next time you make pizza.

Now add fresh basil leaves on top. Put them all over the pie.

Slice 2 large, ripe tomatoes into thin slices. Spread them all over the pie. If your tomatoes are small, use as many as needed to cover the cheese.

I put a few pieces of vegan pepperoni on my pizza. I won't go to that expense again. The pie was great and didn't need the faux meat.

Sprinkle the pizza with a drizzle of olive oil and bake for 10-12 minutes or until the crust is nicely browned and the cheese is melted. Try not to moan while you eat.

Serves 1-4 people, depending on how hungry they are.