I confess that I've never eaten any kind of food called Mongolian--let alone had it barbecued. The only thing I ever heard about Mongolia was that some parents threatened their kids with being sent to Outer Mongolia for misbehaving, though I never knew any kids who ended up there. At least I don't think I do as none of my pals growing up ever disappeared overnight.

Now I'm pretty good in geography, but I'm going to tell you that I had to get down my globe to find out where Mongolia is. I know, I know, you're all laughing because you know it's a country bordered by Russia and China. Truthfully, I think I must not have been paying attention in geography class the day that part of the globe was being discussed.

So I Googled the country and found out more than my brain wished to remember. All of that research just because I came across a recipe for Mongolian BBQ made with Seitan--a faux meat product made of protein-rich wheat gluten. The dish sounded like something I'd like eating. Spicy. Sweet. Crunchy. Chewy. The accompanying photo made me drool. Well, not really, but almost. And then I discovered that the recipe I was so crazy about wasn't even from Mongolia. Some clever chef once fried up a bunch of beef and put a hot, spicy sauce on it and called it Mongolian BBQ.  That's been it's name ever since. And from what I've learned, the dish is now served in that country, even though it didn't originate there. Figure that one out.

It doesn't matter what you name this recipe. It would taste great if it was known as "Gunk". But I warn you. It is warm on the tongue and the back of the throat, though it doesn't make my mouth hurt or my lips swell in pain. And while the food is spicy, it's a good kind of heat that I found addictive and I wished I'd doubled the recipe. By the time my guests and I finished eating, all that remained was a bit of the steamed rice I'd served as a side. Everything else was gone. Which only means I'm going to have to make it again. And soon. Because yes, it was that good. 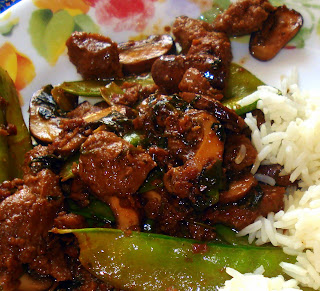 Make the sauce by combining the first six ingredients together in a small bowl.

Place a large wok or skillet on medium-high heat. Add the vegetable oil and stir fry the mushrooms and seitan until they are lightly browned. Add the snow peas, scallions, and cilantro and and cook another 2-3 minutes. Add the spices and stir fry another 3-5 minutes.

Add the sauce to the pan, reduce the heat to low and continue cooking until the sauce has thickened. Serve over the steamed rice.

Try not to smack your lips while eating.

Serves 3-4, depending upon how many sides you have.