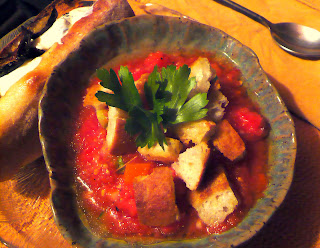 The time of year we have all been waiting for is finally here. Cherry, Roma, Beefsteak, Green Zebra, Purple Cherokee, how we have missed you so! Time to put those pale supermarket imitations we have had to rely on for so many months in their proper place; the dumpster! Don't even open those plastic wrapped styrofoam packages. Just head to your local farmer's market. We only have a few months of this sweet bliss so let's make the best of it!

Native to South and Central America, the tomato was cultivated by the Incas and Aztecs. The word “tomato” is derived from "tomatl," its name in Nahuatl, the ancient language of the Aztec people.Their was a time of course when tomatoes were shunned by the English speaking world. Thought to be poisonous(their leaves and roots are) they were grown strictly as ornamentals by the Northern Europeans until the 17th century. The Spanish and Italians embraced the tomato in the sixteenth century and adopted it wholeheartedly into recipes.

What a trip the lowly “love apple” has taken! From the new world to the old world and then back again. Somewhere along the way something went wrong. Most tomatoes you buy in the grocery store nowadays are grown in Florida, California and Mexico. Picked green when they are just starting to change color, they are stacked on pallets, put into a large room for a few days and ethylene gas is piped into the room. Ethylene gas is derived from petroleum. You know, the stuff you heat your house with and run your car on. The tomato turns a lovely pink color but is still firm and ships easily and without bruising. Voila! You go to the store and purchase a lovely pink and crunchy tomato. But really, who the hell wants a crunchy, pink tomato?

So we look forward to this short season for most of the year when we can get tomatoes that taste like tomatoes. And it's just starting. Hurry down to your local Farmer's Market where the tomatoes taste like tomatoes. Grab a slicer, a loaf of bread, the salt shaker and make yourself a sandwich. Can all you can get hold of for those winter months that we know are coming. Cherish the sweet juicy taste while it lasts. Shun those crunchy ones! As for me? I'm making some gazpacho; as often as I can for as long as those great local tomatoes are in season!

Puree half of the cucumber, tomato, bell pepper, onion and the roasted red pepper
in a blender with one cup of the tomato juice. Pour into a bowl, add the remaining
ingredients and chill for at least two hours. Taste for seasoning. Serve cold and
garnish with croutons. Enjoy your summer.
Posted by johnfordfw at 8:49 AM