There is always something going on in my adopted home town. This is remarkable because as I have said before, the population hovers around 399 and has done so for the past 40 or 50 years. July 4th was this week which is usually a  pretty big deal here; barbecues, games for children and adults alike and a surprisingly large and professional fireworks display. Due to extreme heat and drought conditions though, this year's celebration was canceled. We were treated however to a screening today of a documentary film about the town and the highway that goes through it.

Up until 1999 when construction of Interstate 540 was completed, U.S. Highway 71 was the main road from Kansas City to points south. It runs through Winslow and was chock full of roadside attractions,restaurants and accommodations for lodging. When the Interstate came through, all that changed. The documentary filmed by University of Arkansas film student Brooke McNeely chronicles life in Winslow and how the local community has dealt with the changes. 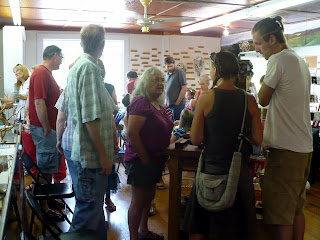 This afternoon' screening of The Road Less Traveled  was held at Ozark Folkways. Food and drink are always served before and during these events and today was no exception. We were hoping for around forty attendees but wound up with closer to a hundred. I was in charge of beverages and made a refreshing Watermelon Sangria. And because I have never been able to make anything in small quantities, we were covered!


The documentary was dedicated to a friend who died suddenly last week who I miss dearly. She was an instigator, one of those people who made damn sure that everyone around her was having a good time.She would come by everyday with her dogs and we would chat and  pretend that she was walking them and not they her. She never had an opinion she was afraid to share but she showed respect and kindness to everyone.


Watermelon Sangria for A Crowd 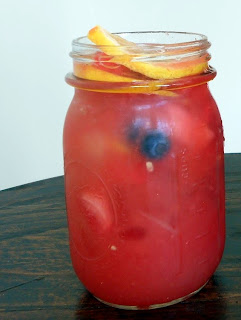 Seed the watermelon and puree it in batches in a blender. Strain it into a large container, add the other ingredients and put it into the fridge to cool overnight. Quantities and ingredients are flexible according to your taste. Not much of a recipe at all really. More of a method. Serve it on a hot summer's day to people you love.

And if you are ever in the area, please stop by and say hello. Winslow, AR is a nice place to be.
Posted by johnfordfw at 6:28 PM