I've never been a big breakfast person. Unlike my hubby, who considered breakfast the best meal of the day, I tend toward supper being the height of epicurean delight. I do, however, like the things people eat for breakfast so I consider it normal that I chow down later in the day, gobbling up all manner of goodies and sometimes serving breakfast twice a day with no complaints from my spouse. 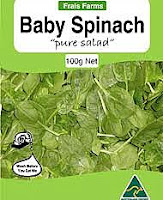 With my doctor prescribing a vegan diet about 2 years ago, I had to wave goodbye to bacon and eggs and toast slathered in butter. I bid farewell to homemade biscuits dripping with honey, potatoes fried in bacon grease, and coffee topped off with real cream.

On the other hand, I lost a lot of weight, my senior citizen skin looks great, I have more energy, and I never have to lay down and take a nap after eating a huge meal. Not that I don't eat humongous meals, it's just that they aren't the sort I used to pamper myself with and I no longer want a nap after eating.

One of my favorite dinner recipes has always been a frittata. Especially if it's topped with about a pound of cheddar cheese. Well, those days are gone--and at best, I haven't been subjected to another hospital stay or, worse yet, colon surgery because of twisted plumbing. And all from eating vegan from the minute I got out of the hospital till now.

As you know, if you've read my posts for a while, I'm always messing around with recipes, either veganizing an old family recipe or taking recipes from vegan books and trying to make them suit my own taste buds. Sometimes I fail--utterly. But sometimes I come up with a good one. Those are the ones I post so you can enjoy them too.

So for any of you who love breakfast, either in the morning or for supper, here's my latest endeavor. I do have to say that you'll know instantly that this fritatta wasn't made with eggs. But the mouth-feel of eggs is there and while your brain won't be fooled, your tummy will be happy because this fritatta actually tastes pretty good. 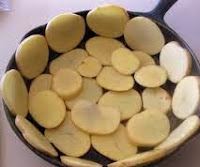 Pre-cook the potatoes until they are half done. I microwaved mine wrapped in a piece of paper towel. When the potato is cool enough to handle, slice it into rounds and place them in a heavy skillet lined with 2 Tbs. of olive oil. I used my big cast iron one. Place the potatoes in a circle on the bottom of the pan. If you have potato slices left over, use them to line the edges. Sprinkle with a bit of salt and pepper to flavor the potatoes themselves.

Spread the diced onion on top of the potatoes.

Add the mushrooms and artichoke hearts. We are building layers, so don't stir your ingredients.

Add the spinach. Lightly sprinkle the vegetable layers with salt and pepper.

Into your blender place:

Blend until the mixture is smooth. Poor it evenly over the skillet contents. Sprinkle with more dill weed. If you desire, you can add vegan cheese, but I didn't have any so I made the frittata as above.

Place the skillet, uncovered, into the oven and bake at 400 degrees for 20-30 minutes or until the top is set and nicely browned. The tofu mixture will have spread throughout the vegetables and baked evenly. Allow the dish to stand about 5 minutes before serving.

Because the mixture is nearly impossible to remove from the skillet in one piece, I serve right out of the pan by cutting in pie shaped wedges.

I served fresh fruit and my version of cornbread as sides.

Black salt is available at www.myspicesage.com. It is the only place I've found it. For some unexplainable reason, it adds an eggy taste to the recipes it's used in. The salt is quite inexpensive and a small bag goes a long way. I am now never without it in my cupboard. It adds a lot to vegan versions of eggs.